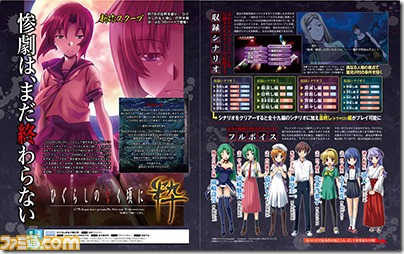 Higurashi When They Cry was first released on PC as a “sound novel” game, which is similar to a visual novel, but focuses more on the mood behind its sound and music. This week’s issue of Famitsu magazine announced that it’s getting a PlayStation 3 and Vita version. [Thanks, Game Jouhou]

Higurashi When They Cry Best, which is the title for the upcoming PS3 and Vita version, will have all 19 chapters of the game, and will also include the part that was made into a drama CD, which unlocks upon clearing the game.

The game will also have additional characters, along with new CG parts that will show all the characters in swimsuits. Publishers Kaga Create also announced that the game is currently being developed so that all the chapters, including sub-scenarios, will be fully-voiced.

The report indicates that there are over 100 tracks for the game’s BGM, which includes theme songs from past games of the series, along with three new tracks. Two of the new songs were composed by 5pb found Chiyomaru Shikura, and the other by dai, who is in charge of the game’s BGM.

Again, Higurashi When They Cry Best will have enhanced scenes to go with other new features. There’s even one that will unlock scenarios depending on how many questions you get right on a quiz.

Higurashi When They Cry Best is slated for release in Japan on March 12, 2015 for PlayStation 3 and PlayStation Vita. A cross-save feature will also let players switch data between both versions of the game.