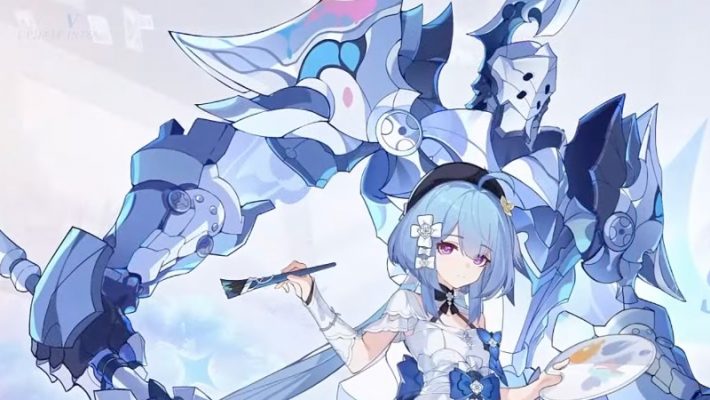 Another member of the 13 Flame-Chasers will become a playable character in Honkai Impact 3rd. This time, it will be another SP, aka an A-rank, one. The Griseo Starry Impression battlesuit will debut in Honkai Impact 3rd 5.8. There’s also a video starring members of HoYoVerse discussing the character, her development, and how she’ll work.

First, Griseo is the 11th ranked 13 Flame-Chasers member in Honkai Impact 3rd. She’s one of the younger people in the group. She’s also known for being a talented artist. This is referenced in her design, as she comes “equipped” with a brush and palette. In the introduction to her video, she also asks about a place to draw.

Once the preview gets into in-game footage, the artistic elements are shown off. When she attacks, it looks like brush strokes with different colors of “paint” hitting a foe. Her basic attack can also “absorb” colors, and the charged attack uses all the paint she collected. The concept behind her suggests she was a child of someone who involved with MOTHs who ended up being part of the Flame-Chasers. So she grew up alongside her fellow members. She’s described as a pure, innocent, and lovable girl, one who might not always take the best care of herself due to being distracted by her hobby. That is also why she has a “knight” to assist her in fighting, as she’s both a young adult and artist, rather than someone more accustomed to combat.

Honkai Impact 3rd is available for PCs and mobile devices, and its 5.8 update will add the Griseo Starry Impression battlesuit. The next update is expected to arrive in June 2022.