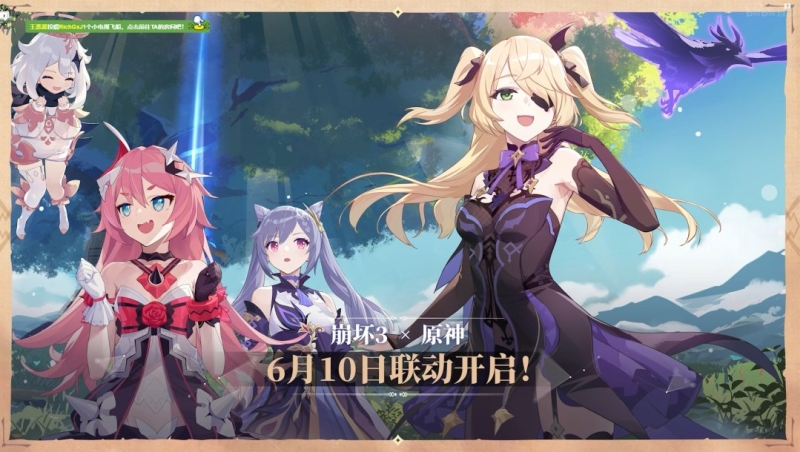 Honkai Impact 3rd is going to get a new crossover event courtesy of its own developer, miHoYo. The Honkai Impact x Genshin Impact crossover event will see two characters from the world of Tevyat make the jump into the game as playable Valkyries. The event was announced on a promotional livestream for Honkai Impact 3rd‘s upcoming 4.9 update, as well as on the official Twitter account. The event is set to kick off on June 10, 2021, though a definitive release date for international editions was not confirmed. [Thanks, Duocean on Reddit!]

According to screenshots and details posted to Reddit by Duocean, the Honkai Impact x Genshin Impact collaboration will add Fischl and Keqing as playable characters. Fischl will be awarded to all players for consecutive logins during the event, while Keqing will be playable during the event, but is not a permanent addition to the roster. Promotional art showed Keqing, Fischl, Paimon, and Honkai character Rozaliya together. Enemies and weapons based on Genshin Impact will also make an appearance. Players will take on foes like slimes and ruin guards in special combat stages. Weapons will be added to the game’s Foundry system and gacha banner.

Other non-combat items will be on offer for the Honkai Impact x Genshin Impact event. Dorm furniture to make a room look like the fantasy environs of Teyvat will be available. A Klee-inspired cosmetic skin for Theresa Apocalypse will also be added (finally making the fantasy of “Tall Klee” a reality). Genshin Impact mascot/snack Paimon will also join Honkai Impact 3rd‘s “ELF” system as well.