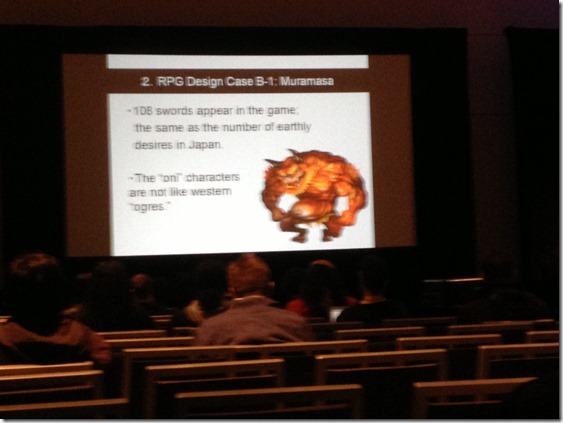 At his “RPG Development: Inspiration and Perspiration,” panel this morning at GDC, Rune Factory series producer Yoshifumi Hashimoto also discussed another game he was involved with—Muramasa: The Demon Blade, a side-scrolling action game by Vanillaware, released for the Wii. Siliconera was in attendance at the talk and we got to hear Hashimoto discuss the game’s development.

Muramasa features two playable characters—a princess named Momohime and a renegade ninja named Kisuke. The game has a distinctly Japanese flavour to it, and some details that even go over the heads of Japanese players, Hashimoto shared during his talk.

For instance, Momohime and Kisuke speak in two different dialects that make it a little bit harder even for Japanese people to understand what they’re saying. Hashimoto pointed out that Momohime has a more royal dialect, while Kisuke speaks in an Edogawa-style. 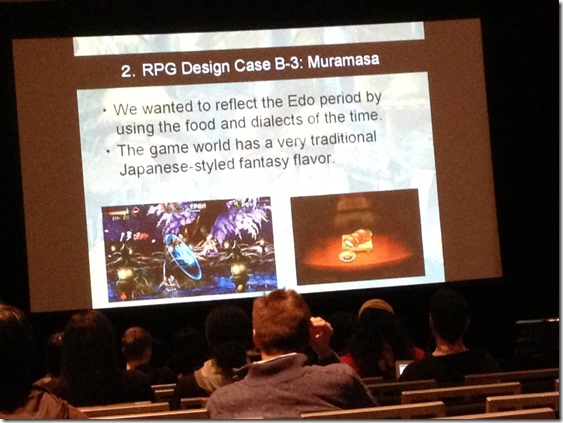 Dialects aside, other pains were taken to make the game’s older setting feel more convincing, too. If you played Muramasa, you may recall that the game had a system by which you could purchase and eat Japanese delicacies from stores you came across while playing. Hashimoto says that the developers picked delicacies that people would eat in the 17th or 18th century in Japan, pointing out that, at the time, fatty tuna wasn’t very popular and you could get it for cheap. Having realistic elements such as these makes the game believable.

Unsurprisingly, while Muramasa was in development, Marvelous were concerned that it wouldn’t be an easy sell in the West, because it looked too Japanese. However, what they found is that this is what Western fans liked about the game.

Muramasa: The Demon Blade is now being ported to the PlayStation Vita as well. Aksys Games will release the game in North America with the title Muramasa Rebirth. You can learn more about the game’s new DLC characters from our recent talk with Hashimoto.