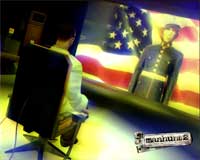 First Manhunt 2 was banned in the UK and now the ESRB rated AO (adults only) version is going to be banned in the USA too. Sony and Nintendo have policies that prohibit AO rated games from appearing on their consoles. Unless Rockstar alters the game, Manhunt 2 will not appear on the Playstation 2, PSP and Wii. Making the necessary corrections will take time and more money from an already financially wounded Take Two, but Rockstar hasn’t lost yet.

Actually, they might have already “won”. Look how much attention is encircling the Manhunt 2 debacle. More attention should lead to more sales. After Rockstar ponies up to make the necessary changes for a rated M Manhunt 2, they can release a rated AO director’s cut version of Manhunt 2 in the future. Where? On PCs, where there are no ESRB restrictions about what can and cannot be published. Sure, stores like Walmart and Gamestop will refuse to carry the AO version, but Rockstar doesn’t have to rely on them anymore. They can digitally distribute the game and sell copies online through their official store. Atari pulled off a similar feat for Indigo Prophecy, it was released in stores with an M rating and later an AO version coined Indigo Prophecy Director's Cut was sold online. Of course Indigo Prophecy never got as much attention as Manhunt 2 and the director's cut probably didn't break sales records.  After all the AO hype and discussion Rockstar shouldn’t have any problem double dipping with Manhunt 2.