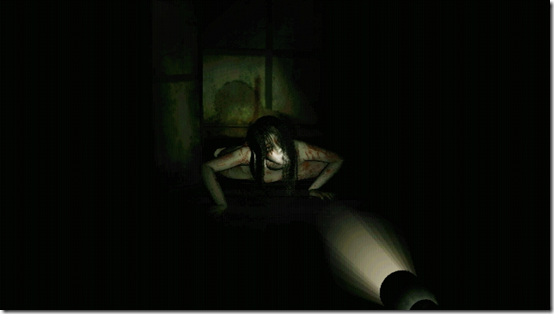 Ju-On from AQ Interactive came out of nowhere last month and surprised a lot of people because it actually looked like a decent horror game. Information on the game has been pretty scarce so far, but now we finally know how it controls.

As expected, you use the Wii remote’s pointer to control the flashlight, but there’s a catch: the B trigger is used to move forward, while Down on the D-pad is used to move back. The A button acts as your context-sensitive “action” button. Apparently, the game doesn’t make use of the Nunchuk at all, which sounds so-very-cool. The game has a mechanic by which your flashlight can run out of battery, leaving you alone in the dark (no pun intended), which should make for some interesting situations.

As we previously reported, Ju-On also has some sort of a “multiplayer” element that sounds akin to Super Mario Galaxy or The Crystal Bearers where a second player can pick up a second Wii remote and introduce some sort of “surprise” element to the game. Details on this are sketchy.

Interestingly enough, Dengeki sings praises of the game’s sound, calling it excellent and advising people to play the game with headphones to further enhance the thrill.

Personally, I’m kind of excited for this. The Wii is getting a lot of survival horror games this year between Fatal Frame 4, Silent Hill: Shattered Memories, Darkside Chronicles and Dead Space Extraction. Funny thing is, I get the feeling Ju-On and its original story might just kick all their asses in the scares department.