A small Japanese company known as Cave has been supplying a healthy stream of shooters to both the arcades and the Japanese PS2, keeping up where other publishers abandoned long ago. However, practically all of their games have a very distinct feeling, one that’s sometimes a little too close for comfort. Dodonpachi Daioujou, Espgaluda and Mushihime-sama are all excellent titles, but outside of the graphics, music and some vaguely different scoring mechanics, they’re practically the same game. Not that most shooter fans mind – Cave is one of the few companies that still supports the genre at all, so it’s definitely better than nothing. 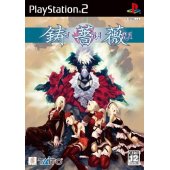 Ibara is the most recent title to be released by Cave. You’re an agent sent to destroy an organization called the Rose Garden, a group of goth women wearing fancy dresses who also happen to be a bit destructive. Plotlines in arcade games are rarely worth mentioning, although the cast of characters is a bit more developed then we’re used to. Still, it’s mostly just window dressing.

It’s also notable in that Ibara doesn’t really feel like a Cave game. Although the differences may be subtle, Ibara is much closer to the mid 90s arcade/Saturn shooter Battle Garegga, which in itself is somewhat of a cult classic. It’s still a fast paced overhead vertical shooter, wherein you’ll need to use near-superhuman reflexes to dodge complex bullet patterns and cause as much mayhem and destruction as possible. It’s an exceedingly difficult game, even on the easiest difficulty level, but you’re granted unlimited continues to make to through all six stages. Still, the main goal of any shooter is to beat it in one credit, and unless you’re a dedicated fanatic, you’ll be lucky if you make it to the third stage before continuing.

Unlike other Cave shooters, there are actually different weapons to collect. In addition to your standard machine gun and 5-way attack, your ship has options that float outside of your character’s plane, which can be armed with missiles and flamethrowers. You have a limited number of bombs, which can be used to transform enemy bullets into roses, which in turn gives you extra points. In departing from the formula, there are a few annoyances – mainly, there’s no standard color for enemy bullets, so it’s often difficult to pick them out amidst all of the enemies, explosions, power-ups and other crazy things flying all around the screen. If you’re playing on a small TV, be prepared to squint, because it can get pretty bad.

The graphics design in Ibara is somewhat on the drab side. You’ll fly over factories and forests and huge battleships in the sky, but very little of it is very interesting. Only the final levels – which includes a huge rose garden and a retro-futuristic city – show any real spark of imagination. Like Mushihime-sama, Taito handled the port, and the change in resolution causes a bit of graphical issues, and there’s no option to filter it out.  There are some impressive explosions, but that’s about as fancy as it gets. Even though the visuals don’t particularly impress, Ibara’s soundtrack is excellent. Composed by Shinji Hosoe, the music is a mixture of gothic orchestrations and hard rock, with a bit techno occasionally thrown in. There’s even different music for the various modes in the game, which keeps the rotation fresh.

The port itself doesn’t offer much in the way of extras, other than a gallery option that’s open at the beginning. However, the designers did add an “Arrange” mode which plays a bit more like a typical Cave shooter. Your ship slows down as they fire, the enemy bullets are all colored, the hit box size has been reduced, and the bosses all have life bars. You can even select between weapons once you’ve obtained them, as well as set formations for your options. It’s a more finely tuned variation on the original game, and it’s probably better overall, except for one snag – you only get one credit and you can’t set any options. In the end, this option is really only suitable for the hardest of hardcore – it would’ve been much nicer to mix and match some of these features with the regular game, to create a more personalized experience.

Other than the ending text, all of the menus and the rest of the game is in English.

Since the market for these types of games is pretty small, shooters like these are almost never localized.

Overall: Other than some small quirks, shooter fans are likely to enjoy Ibara, even if it doesn’t quite stand up to the design standard of its brethren. The difficulty will alienate pretty much everyone else, although the soundtrack is recommended to anyone who remotely likes video game music.