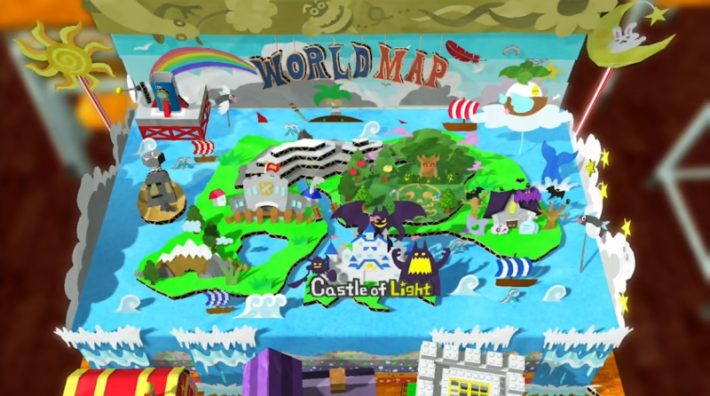 RPG Time: The Legend of Wright may be a video game played on screens, but the world it invokes feels as physical and present as an arts and crafts hobby. The game’s unique aesthetic immediately draws eyes and and evokes childhood memories, as Andrew noted in his review. We had the opportunity to grill RPG Time‘s Designer Tom Fujii about the game, his inspiration for Kenta’s story, and the prospects of seeing a real-life RPG Time tabletop game.

Siliconera (Josh Tolentino and Andrew Kiya): RPG Time’s story is about a boy named Kenta, an aspiring game designer. Is there a real-life backstory to that concept?

Tom Fujii: When I was in elementary school, I had a friend who was good at crafting and let me play with his handmade games. Although the setting was not at school but in his room, the moments when I played the games he made for me became a wonderful memory of my childhood.

Clearly, a lot of love went into making this game, and it shows in all the little details. Is there anything you’d like players to look out for?

Tom Fujii: I crammed a lot of love and ideas into the game, so I’d like players to enjoy it until the end. I’ve also drawn ideas here and there that don’t relate to the progress of the game, such as in the corners of the notebook, so make sure to check them out as well!

RPG Time’s visuals take a lot of inspiration from physical objects, like hand-drawn maps and miniatures used in tabletop RPGs. What inspired the team to adopt this craft-based aesthetic?

Tom Fujii: Handmade games and similar things I enjoyed when I was in elementary school have inspired me a lot. I’ve researched on the internet how people played during their childhood in other countries outside of Japan, where the staff has spent their time before. Even if countries and regions differ, it turned out that memories of handmade games they enjoyed playing as a kid using stationery are common throughout the world, which was a surprise to me.

We are hoping to express craft-based aesthetics in a digital game by setting up school desks and chairs to prepare the crafts in real life as they appear in the game, or limiting the amount of copying and pasting to generate data. As a result, though it might be a subtle difference, I think this craft-based aesthetic can be sensed throughout the game.

The game seems to emphasize a lot of drawing and erasing in Kenta’s adventure. Will players have a chance to freely draw their own designs or items?

To complete the game, players need to influence The Legend of Wright by drawing. Separately, although it doesn’t do anything to progress the game, a feature allowing players to doodle on the notebook can be unlocked by reading all of the tutorial, so I’d like players to try clearing the Tutorial Dungeon as well.

If you were to make a physical version of RPG Time as a real-world tabletop game, what would you most like to include from the video game version?

That sounds like a lot of fun. I’d love to include an appearance of the game master, Kenta, on the tabletop game as well. Though it’d be ideal if Kenta could appear in real life and play the tabletop game with players, I’m sure Kenta would prepare hints to entertain the players through the tutorial, cards, and pieces.

Thanks to Tom and DeskWorks for taking the time out to talk to us! This interview has been edited for clarity. Note: As the interview was conducted prior to RPG Time’s full release, it speaks about the game in the future tense. RPG Time: The Legend of Wright is available on Nintendo Switch, PlayStation 4, Xbox One, Xbox Series X|S, and PC via Windows. The Steam version will release on September 13, 2022.