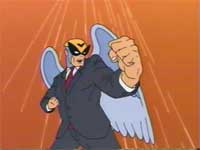 The other notable listing on Gamefly is a Wii port of Harvey Birdman: Attorney at Law set to come out the same time as the PS2 and PSP versions. If this news is true I wouldn’t expect this to be a full “Wii-make” since Harvey Birdman is at its core an adventure game, similar to Phoenix Wright.

A few weeks ago I played the PS2 version and I liked it a lot. Fans of the show are going to dig how it feels just like the show right down to the writing and voice acting.