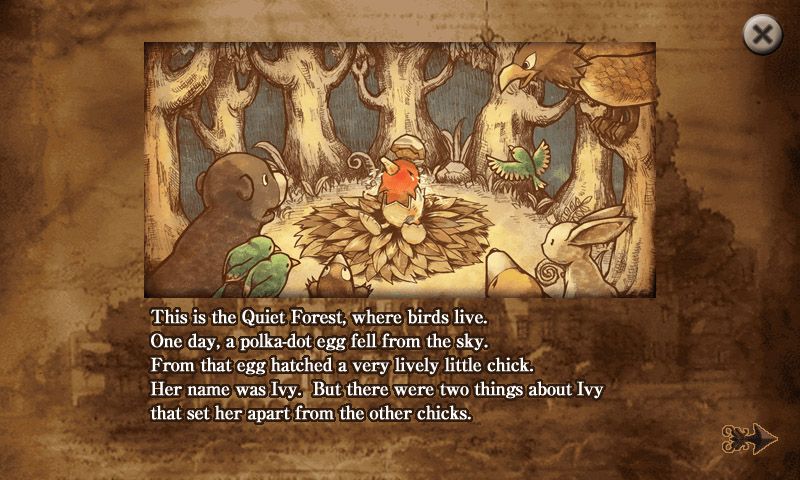 Ivy the Kiwi? appears to be nonthreatening. There’s a sepia hue over the entire game, and the hand drawn characters may lead gamers into a false sense of security. Then you pop the disc into your Wii and struggle to keep up with a constantly moving baby bird so she isn’t impaled on spikes, dive-bombed by birds, attacked by rats or drowned by water drops.

Ivy is an adorable, newly hatched, baby bird. The thing is, she doesn’t look like any of the other birds around and she’s all alone. Her first instinct is to find her mother, as she can provide all the answers. So, Ivy sets out alone to find her mom.

You only have one way to help Ivy find her mother, and that’s by mastering the art of springy vines. It’s deceptively simple to do. You press the A button and to create a vine. Holding A and moving the remote stretches it. If you wait until Ivy is on the vine, you can continue to hold A and move the remote to lift her to safety. Release A at any time to create a vine platform, but only three vines can be onscreen at once though. When she’s in the middle of a placed vine, you can press B and grab it in the center, aim and propel her in the air like a pellet in a slingshot. While she’s twirling in the air she can smash blocks or enemies.

While you’re drawing vines, Ivy is constantly moving. It keeps the player on his or her toes, ready to anticipate Ivy’s every move to help her safely get to the end of each level before time runs out. It’s bad because it doesn’t give you time to appreciate how beautiful the game is while you’re playing it. 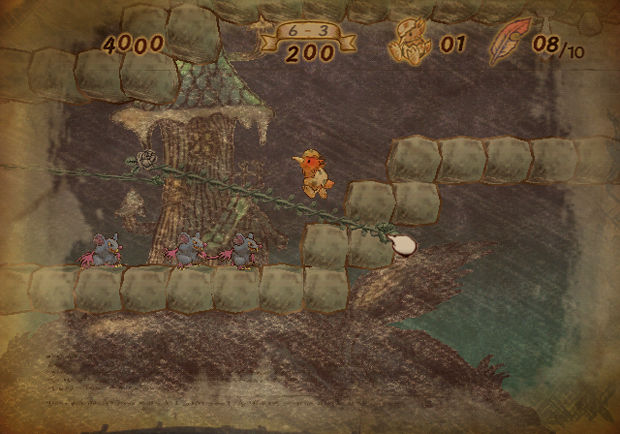 Ivy the Kiwi? is incredibly striking, with storybook visuals that appear hand drawn. It’s be easy to look at screenshots and think it’s a pure 2D platformer, but when you see it in action you discover this surprising amount of depth and dimension to the characters and levels. I think it’s one of the most beautiful Wii games I’ve seen, and fits in nicely alongside Muramasa: The Demon Blade and Rune Factory: Frontier in terms of presentation. Screenshots just don’t do it justice. If you really want to understand why Ivy the Kiwi? works so well, you have to see it in action.

There’s actually only one thing I would have liked to have seen. I’d have liked story segments inserted between areas. Even one or two static screens would have been satisfying. There’s too little artwork and exposition in Ivy the Kiwi?, which is odd because you’d think there’d be ample opportunity for a few vignette segments detailing the journey of this orphaned bird searching for her mother scattered throughout the 50 Story mode levels. The ending is quite satisfying though, and adorable.

Level design and gradually increasing the difficulty make Ivy the Kiwi? satisfying. The first 10 levels or so aren’t too complex, and mainly serve as a means to introduce players to control concepts and strategic vine application. Once you’re halfway through the story mode it gets hard. Levels turn into mazes, there are all kinds of enemies placed everywhere, water’s dropping, you turn a corner and there are spikes, time’s running out and all of a sudden you’ve accidentally stretched a vine too far or misjudged trajectory and Ivy’s dead. You fail.

Thankfully, there are two things that prevent Wii Remote related throwing fits. The first is that the game automatically saves what level you were at, so you can pick up and restart where you left off. Second, you rack up extra lives like crazy. You get extra lives as your score increases. You get extra lives for every ten red feathers you collect. So yes, you’ll often find yourself cursing your own ineptitude (and probably blame the game a few times), but will have ample opportunity to redeem yourself and guide Ivy to safety. 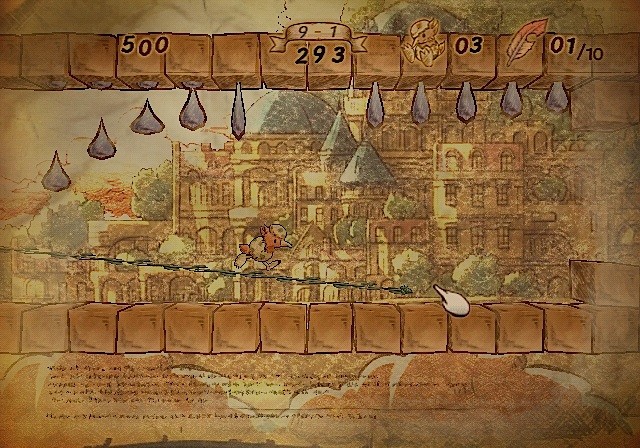 And then, there’s something that encourages Wii remote throwing rage. The Wii version of Ivy the Kiwi? has cooperative and competitive multiplayer modes. The coop mode makes the game far easier, allowing multiple players to help Ivy survive a level. It’s quite helpful and makes the game less stressful. You can even have a friend pick up a second remote and help you through the story and bonus mode levels.

Each person is trying to guide Ivy through the same level in their own little section of the screen. Sounds good, right? It is, until you learn that your vine drawing and controlling abilities aren’t limited to your Ivy and level window. If you’re feeling particularly cruel, you can draw a vine in your opponent’s level, sending their Ivy to her doom, and later a defriending on Facebook.

While Ivy the Kiwi? is short, it possess a number of qualities neglected in many games. It’s beautiful, challenging and forces the player to apply his or herself to succeed. It may appear deceptively simple and I’m sure many unwitting buyers will pick it up thinking guiding a bird to a goal only using lines will be easy. Don’t make that mistake. Ivy the Kiwi? ends up being quite a hardcore game, even if the main character looks cuddly.