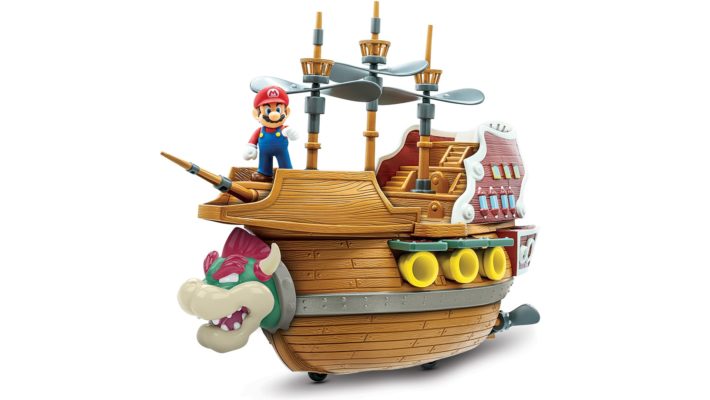 Jakks Pacific announced a new Mario playset over Twitter to celebrate Mario Day 2021. The Deluxe Bowser’s Airship playset is based on his iconic airship. It will be released in Fall 2021 and cost $39.99.

The Bowser airship playset is large enough to accommodate some of Jakks Pacific’s line of 2.5” Mario toys. It even comes with a Mario. Its features include spinning propellers, cannons, wheels, a figurehead of Bowser’s face, and a storage space below deck for additional Mario toys. A rear-mounted depiction of Bowser’s head, six doors with Bowser’s face, and a rendition of Bowser’s airship theme music triggered with a push of a button further the King Koopa motif.

Jakks Pacific built up to the announcement through a series of tweets containing a “Mario Monday” hashtag. These depicted other Jakks Pacific Mario toys and playsets alongside an airship-shaped shadow.

Nintendo is also celebrating Mario Day 2021, which is celebrated on March 10th of every year. The company discounted four of its titles on the Nintendo Switch eShop by 35%. The discounted titles are Luigi’s Mansion 3, Mario Tennis Aces, Super Mario Maker 2, and Super Mario Party. The sale ends on March 13, 2021 at 11:59 PT.