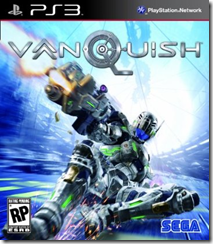 Famitsu has a Vanquish spread in this weeks issue and a release date for Japan. The magazine’s handy info box says Vanquish will be ready on October 21.

It appears that Sega is preparing a worldwide launch, a first for PlatinumGames.

Back at E3, Sega confirmed October as the month for Vanquish in North America and Europe. A specific release date was not announced, but it can’t be too far or ahead of October 21.