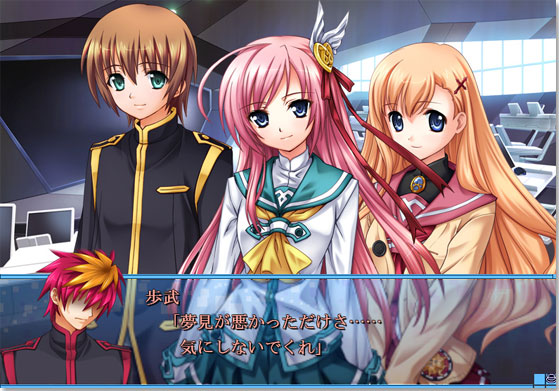 Translated “Yumina the Ethereal,” JAST USA’s newly licensed title involves more than just dating-sim elements — it’s also an RPG. The company announced the acquisition at their panel during Anime Expo this past week.

Kikouyoku Senki Tenkuu no Yumina is a dungeon-crawling, sci-fi role-playing game crossed with a dating-sim. The game is based around the protagonist, transfer student Akashima Ayumu, who is sent to the school of Midorishita Yumina, in order to protect the girl. Eventually the two of them end up in outer space.

Tenkuu no Yumina is scheduled to release in 2011. The game is developed by Eternal, a part of visual novel publisher, Will, responsible for publishing Yume Miru Kusuri in Japan. Proceed here at your own risk (NSFW) for more screenshots.