Originally announced in 2001 Kameo has shifted from three different platforms from the Gamecube all the way to an Xbox 360 launch title. While Rare has been the developer all along Kameo has evolved from its first E3 showing. It still has the same fairy, but now it has different monsters to morph into and a world to explore. Let’s take a look back at Kameo from its Nintendo roots to a high definition brawler. 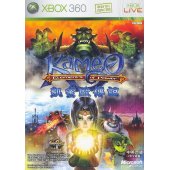 When Kameo was first shown at E3 the demo showed a Kameo whose art style is still similar except for a wardrobe change. Trolls were running around and Kameo could combat them with her morphing power. However, the creatures she could change into were quite different. There was a dinosaur, a fire breathing lizard and some kind of slime monster. Kameo also could call upon two partner monsters to escort her around. Some of the monsters were hulking beasts (one looks similar to Chilla) and others were toned down so Kameo could focus on fighting.

Kameo is decked out in green (the color of the Xbox) and given an attitude for her new audience. Rare also dropped some of the ideas like the allied monsters and ditched the morphs they showed off when Kameo was a Gamecube game. Now armed with the boxing plant Pummel Weed, morph ball like Major Ruin and Deep Blue for those underwater levels Kameo was ready to battle against the troll army and save her family. While Rare did keep Kameo primarily as a combat game the Xbox 360 build also added in a bunch of puzzle elements. If you want to run to the next area you might need to burrow with Pummel Weed or make a bridge with the rock carrying beast Rubble. Kameo also took some cues from the popularity of sandbox games. Kameo’s world was full of NPCs that you could talk to and do side quests with. Instead of evolving your creatures while attacking like in the Gamecube demo, the 360 game has players collect elemental fruit to gain new skills. It’s unclear if Rare intended to include as much exploration as the final version of Kameo or just make it a collect-a-thon like Banjo Kazooie. In either case the added quests are a welcome addition to what would otherwise be a linear game. Kameo also takes a risk with its controls. Instead of having attacks mapped to the face button, they’re set on the triggers. FPS gamers probably felt right at home with the control scheme, but it’s quite different from other games in similar genres.

Nearly six months after Kameo has been released the game has actually gotten better. Rare recently added in an online patch for Kameo so players can play co-op games via Xbox Live. Online co-op has gives players a reason to dust Kameo off the shelves and start playing again. Now if you want to be on the top of the leaderboards or earn those new achievements you’ll have to sharpen your skills. Online co-op also has another benefit a single screen instead of the vertical spilt screen when playing with a friend at home. The only downside about online Kameo is the lack of people playing it. Finding a game isn’t a split second like when searching for a PDZ deathmatch.

+ Pros: Rare makes good use of the different monsters by creating levels designed for each of skills. Also the different characters to play around with makes combat more interesting than if Kameo only had a single star.

– Cons: Tipped on the easy side, Kameo can be completed quickly if you ignore side quests.

Overall: Even though it lives in the shadow of Perfect Dark Zero and Call of Duty 2, Kameo’s innovations and co-op online gameplay make it a worthy addition to anyone’s Xbox 360 library.