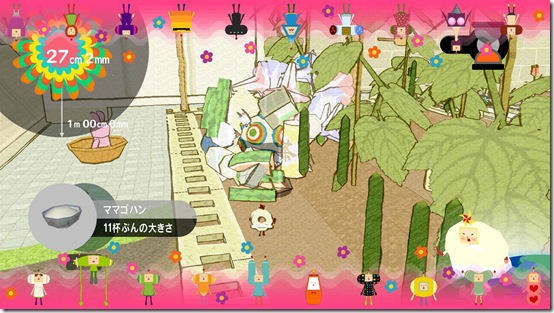 Katamari Forever (aka Katamari Damacy Tribute) is almost done. Namco Bandai will release the first Katamari game for the PlayStation 3 in Japan only July 23. The release date comes with a few tidbits, like the 100+ cousin count.

Retailer Rakuten says there are over 100 playable characters and over 30 stages. Levels that take place in the King’s Memory have King Shock spots. Touch one of these to make your Katamari grab nearby objects like a magnet. King Shock spots also make the cousins celebrate by dancing as seen in the screenshot.

The game will have four play modes: New Katamari Damacy (which has Sixaxis jumping), Katamari Drive (short play), Usual Katamari Damacy mode (classic), and Endless. Also like the other Katamari titles, you play a mini-game where you fail a stage in Katamari Forever.