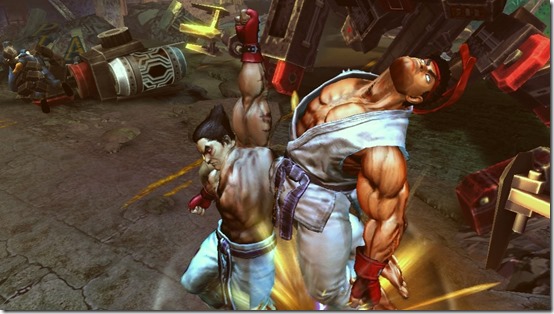 It’s been a while since we heard much about Tekken X Street Fighter, which has been on hold for a few years, but Tekken series producer Katsuhiro Harada had a few words to share about it in a recent interview with VGC.

Tekken X Street Fighter was first announced by Harada in 2010 during the San Diego Comic-Con International, where it was revealed that the game would feature a Tekken-style 3D fighting game engine as an opposing title to Street Fighter X Tekken that featured a 2D-style gameplay closer to Street Fighter IV.

Street Fighter X Tekken, which was also announced at SDCC 2010, ended up releasing two years later in 2012, but there wasn’t much coming out of Bandai Namco’s camp on Tekken X Street Fighter. We were reminded on several occasions that the crossover title wasn’t canceled, and that it was in fact well into development with progress that Harada estimates was around 30% complete.

Tekken X Street Fighter was expected to release on the PS3 and Xbox 360, but with the PS4 and Xbox One approaching at the time, Bandai Namco decided that it needed to change and reconsider platform strategy; however, in 2016 the game’s development was put on hold.

It’s been a few years since then, and Harada shared his current thoughts on releasing the titles in the interview:

Katsuhiro Harada: “Yes, I am emotionally up for it. I still want to release the game. However, as much as I want to proceed with the project, things have changed a lot since 2012. So I need to get approval and I need to speak to Capcom again as well — they may say ‘no’ now.”

“I was excited to see how well Bandai Namco could convert 2D characters like Akuma from Street Fighter, and Geese from The King of Fighters into 3D models and make them look really sexy, visually,” he said, referencing guest characters featured in Tekken 7.”

“I was excited about that and I have passion for it, but my logical and business thinking has me wondering if I really should do it.”

Lastly, Harada shared more on how things went down, on why they decided to put its development on hold, and one of the reasons being the recent success of Tekken 7:

Katsuhiro Harada: “We started the project back in 2012 and the real interesting question then was, what is going to happen when the Tekken team designs characters for Street Fighter? We started creating 3D models and I really liked them – they looked super cool – and the project progressed to about 30% completion.

“However, when we were ready to progress further with the project, Capcom released Street Fighter V and then we released Tekken 7. Those titles are some of the best fighting games ever and they became very successful.”

“So then I started to wonder, do I really want to attempt to compete with these huge titles? It could end up splitting the community. That was a serious consideration from the marketing perspective. So I decided to hold off releasing the game for one or two years. Following that, Tekken 7 is now doing very well as a service game.

“Traditionally, the life cycle of a fighting game is very short – maybe one or two years and then you make a sequel. But Tekken 7 is very successful as a service game with its DLC. That makes it much harder to justify releasing another game, while Tekken 7 is still doing so well.”