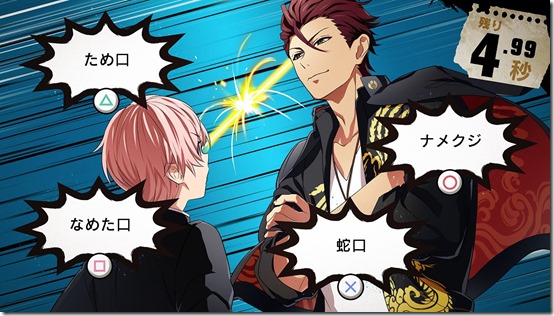 Kenka Bancho Otome, the first entry in the series with a female protagonist, isn’t going to be arriving just after White Day. Instead, this “return gift” will be released in the spring, rather than on March 17th. The push is a quality control measure, designed to result in a better final product.

The Kenka Bancho Otome deviates from the series’ regular formula. Instead of an open-world beat’em up, it’s a visual novel. Players follow Hinako, an orphaned girl who learns she’s secretly a daughter of the Onigashima yakuza family. Her twin brother, Hikaru, approaches her and asks her to go to the Shishiku Academy, a school for delinquents, in his place. To help protect him, the heroine agrees to go. This means having the opportunity to fall in love with Totomaru, Konparu, Kira, Mirako, and Houou, five delinquents also attending the school. The heroine goes around the school, choosing which of the guys to interact with and events to participate in.

Despite being a visual novel, Kenka Bancho hallmarks still appear in Kenka Bancho Otome. There are Menchi Beam stare-downs, where the heroine must choose the proper insults while locking eyes with an opponent. There are also fighting segments, which appear to proceed like a rhythm game as icons that appear on screen must be pressed at the appropriate time to win.

Kenka Bancho Otome will come to Japanese PlayStation Vitas this spring. A worldwide release has not been announced. The only Kenka Bancho game to ever be released outside of Japan is Kenka Bancho: Badass Rumble for the PlayStation Portable, the third game in the series.