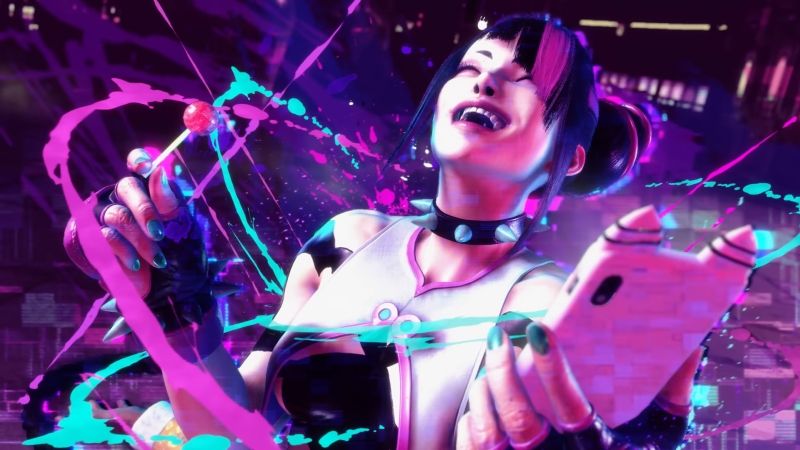 Capcom unveiled two more characters for the Street Fighter 6 playable roster. Juri Han returns for her third appearance since Street Fighter 4. Kimberly is an SF6 newcomer. She’s also connected to Guy, who appeared in Final Fight and Street Fighter Alpha. Both characters were present in a leak of the game’s full roster back in June 2022. Juri and Kimberly were not confirmed in SF6 prior to this reveal, though.

Check out the Juri and Kimberly Street Fighter 6 teaser below.

The Street Fighter 6 teaser opens with Kimberly, giving the business to fellow newcomer Luke. Kimberly’s fighting style is based on ninjutsu techniques, blended with her talent for street art. Her moves often use cans of spray paint and involve her tagging opponents with graffiti. Kimberly’s default outfit combines a red top with gym pants, athletic tape, and a set of large, prominent hair braids. She also accessorizes with an old Walkman-style cassette player. Kimberly is voiced in English by Anairis Quiñones (Mirko in My Hero Academia, Echidna in Re:Zero, and Nessa in Pokémon: Twilight Wings). In Japanese, she’s voiced by Nao Toyama (Lyria in Granblue Fantasy, Chiho in The Devil is a Part-Timer, Kalina in Girls’ Frontline). Design notes from Game Director Takayuki Nakayama reveal that Kimberly is “infatuated with ’80s pop culture.”

Uninhibited power-seeker Juri enters SF6 on a motorcycle, sliding to a stop in an homage to the Akira bike shot. Juri’s new Street Fighter 6 outfit is a complex blend of a jacket, bodysuit, and loose pants. Her jacket covers an outfit mainly made of black tape laid out to mimic the appearance of a spider. Juri’s fighting style has been remixed somewhat. Many of her moves from SF4 and SF5 have different properties in SF6. Some familiar moves have been given new names like Saihasho and Go Ohsatsu, and can be performed without expending stocks of Fuha. They can be chained together and enhanced if Juri does have Fuha stocks available, though. Juri’s flying dive kick, Shiku-sen also returns from Street Fighter 4. Juri is voiced in English by Jessica Straus (Lilith in Darksiders 2, Pi in .hack//G.U. Last Recode). In Japanese, she’s voiced by Eri Kitamura (Homura in Senran Kagura, Juliet in Lollipop Chainsaw, Sayaka in Puella Magi Madoka Magica).

Juri and Kimberly will appear in Street Fighter 6, which launches in 2023 for PS4, PS5, Xbox Series X|S, and PC.