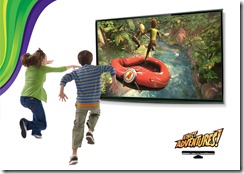 Wii Fit watch out, Kinect Adventures! could double as a family fun fitness game. At E3, I got to try three of the twenty “adventures” in the Microsoft made compilation.

The first one, River Raft, was the best. In this game, two players control an inflatable raft as it floats on rapids. You can steer the raft by sliding, with your whole body, left or right. The trick is you have to be in sync with the other player. If you slide right and your partner goes left, the boat won’t turn.

Coins were scattered along the track and in the air. I had to jump to those, which made the raft jump too. Both players don’t have to jump. Actually, it’s better if one player stays on the ground because the second player can activate a double jump by leaping. That’s the key to surfing on islands in the sky. The hidden path has even more jumping since I had to make the raft vault from one floating island to the next.

When I reached the finish line I moved on to an obstacle course, one of the competitive games in Kinect Adventures. Like River Raft, this game was on-rails and I had to dodge obstacles while standing on a moving cart. 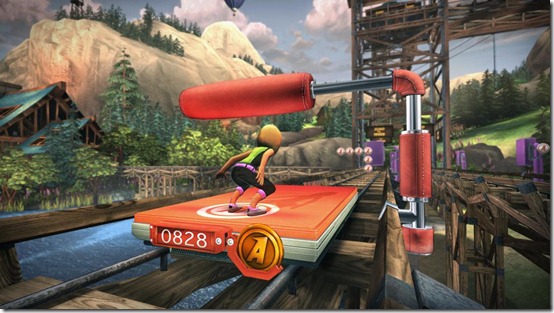 There were foam poles to duck underneath by, well, ducking. Foam beams also popped out from the right and left and I had to slide in the other direction to evade them. While the controls are intuitive, the Kinect sensor didn’t seem like it could keep up. Sometimes I would duck or slide, but the game wouldn’t change my character’s stance fast enough to avoid getting hit. Part of the problem may be the way the game is designed. You jump to accelerate and because I wanted to see how fast I could go I kept jumping. Sometimes I would land and duck right away to (attempt to?) dodge, which wasn’t registered. It’s possible the obstacle course game has too many up-down-up motions to detect.

Rallyball, a revised version of the Ricochet game demoed at E3 last year, was the final game. In this game you swat balls to break bricks. Think Arkanoid mixed with team handball plus Kinect. Microsoft changed the demo a bit by adding a neat jump in co-op feature where a second player can join the game by jumping in between rounds. The game shrinks the size of the bouncing balls when a second player joins.

During all three games a camera icon popped up, which meant the game just took a picture of you playing. At the end of the demo, I had a chance to make a living statue, which was really a video monument. A Microsoft representative said these could be shared with other players and social media services like Facebook.