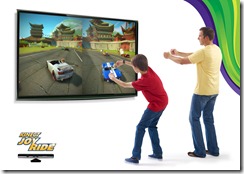 Kinect Joy Ride, like all of the Kinect games on display, does not use a controller. Players drive their car by moving their hands, as if they were holding a steering wheel. Tight corners are tackled by leaning into them with your body. You don’t need to shift all of your weight right or left. Lifting one leg and tilting the same direction as the curve was enough to drift. Drifting powers up a turbo boost, which you can activate by pumping your hands towards the screen.

The other hands on demo was all about tricks. In stunt mode, I drove up and down a half-pipe to collect cherries and avoid airborne mines. Tricks are also motion activated. Spinning around makes your car twirl in mid-air, for example.

I asked the staff on hand if there was more to Kinect Joy Ride and the answer is yes. The track in the E3 demo weren’t final. The team at BigPark plan to add secret shortcuts and items, like rockets which you can fire from your hand.

While the controls may lack precision, Kinect Joy Ride’s invisible steering wheel worked decently. The only problem I noticed is when someone stood behind me, which confused the sensor. This is far from Forza Motorsport Motion and even full blown kart racers, but elements like the body-tilting drifting and spinning around for tricks made Kinect Joy Ride amusing.