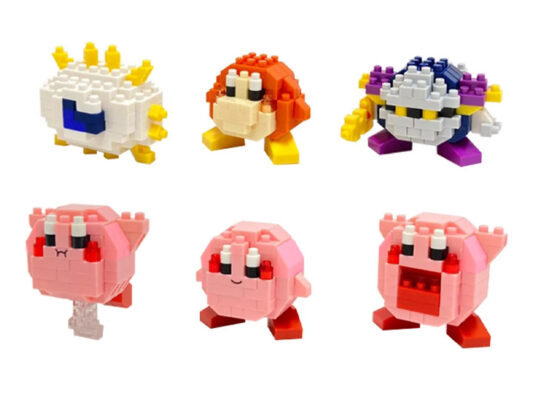 A Kirby collection of sets is about to join the Nanoblock line of blind bag Mini Nano. In September 2021, Kawada announced they will be released for 660円 (~$6) each. There will be six different models people can get. However, since Mini Nanos are blind bags, people won’t know which design is in the bag until they open it. [Thanks, Hobby Watch!]

This Kirby Nanoblock Mini Nano collection will have six characters total in it. Three are Kirby variants, while the other three are familiar enemies from the series. There will be a standard Kirby, one in the middle of inhaling, and a floating inflated Kirby. (The flying kirby will have a translucent stand people can build.) As for the enemies, Meta Knight, Kracko, and Waddle Dee appear.

While these are blind bag sets, there is a way to get all six. Each full box will include one of each character. At the moment, the only retailer outside of Japan offering that is Big Bad Toy Store, though this could change closer to the Nanoblock Mini Nano release date. It has the full set for $35.99. Amazon Japan doesn’t have a listing for them yet.

There have been plenty of Nanoblock Mini Nano series based on popular characters. For example, sets involving Evangelion, My Hero Academia, Pokemon, Snoopy, and Ultraman characters are all available.

The Kirby Nanoblock Mini Nano will appear in Japan sometime in September 2021.