Super Mario 3D Land was developed to be a bridge between 2D and 3D Mario games. 2D Marios sell a whole lot better than the 3D ones in general, and this is especially evident in Japan, where certain kinds of players appear to actually be intimidated by 3D Mario games.

Nintendo’s first attempt at bridging the gap was in Super Mario Galaxy 2. That didn’t quite work out as effectively as they’d have liked it to, so Super Mario 3D Land was built with the sole purpose of blurring the lines between the 2D and 3D styles. Let’s take a look at how people responded to that, with two months worth of sales data from Japan:

* During week 7, Galaxy 2 wasn’t in the top-20 software sales chart. Since Media-Create don’t provide numbers for games outside the top-20, I’m not sure exactly how much it sold that week. Just that it was below 18,614 copies.

Or to put it in graph form: 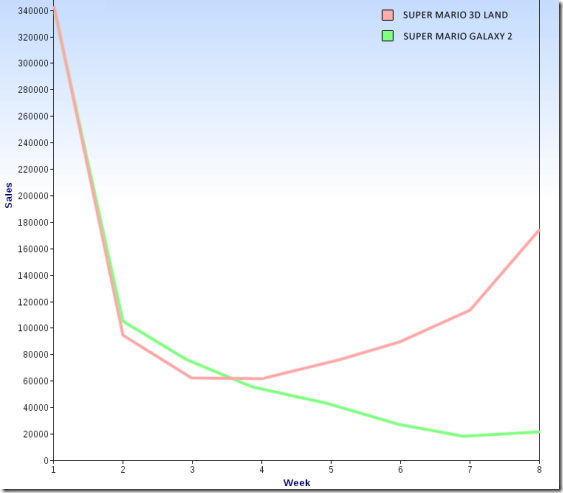 Mission accomplished for now, I would say. Once the next 3D Mario game is revealed, and we learn more about it, we’ll probably have a better idea of if and how Super Mario 3D Land has affected the future of 3D Mario titles.