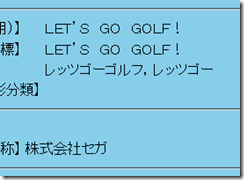 Prope developed Let’s Catch for WiiWare and made Let’s Tap for Wii. While it wasn’t a hot seller, Let’s Tap was creative and Tap Runner was neat to play.

Perhaps, after a year and half, Sega is giving the Let’s series a second chance. In Japan, Sega registered the rights for Let’s Go Golf. This title is pretty easy to conceptualize. If it exists, this is probably some kind of golfing game.

Last year, Sega trademarked Toy-Lets and Let’s Party for use with video games. So far, nothing has been done with either of these.