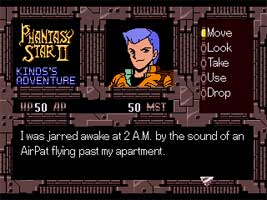 Before online gaming was chic Sega tipped their hat into the online ring with the Sega Channel in the USA and SegaMega Net in Japan. Both devices let players access online only content such as Mega Man: The Wily Wars (*was released as a cartridge in regions outside the USA) and a series of text adventures set in the Phantasy Star II’s timeline. Not only was one of the text adventures unearthed, but M.I.J.E.T put in the time to translate the game into English. If you’re a diehard Phantasy Star fan be sure to check out Phantasy Star II: Kinds's Adventure. It’s a look back into Phantasy Star’s online debut, way before the series was ever conceived as an MMO.