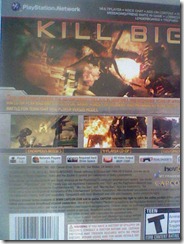 I’m installing it, but there isn’t anything interesting to report other than a guy running around with his gun pointed in front of him underneath Akrid.