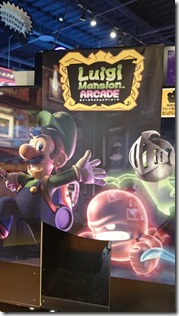 We recently reported that Capcom are working on a new Luigi’s Mansion arcade game, but not much was known about it. Some people in Japan who got to try out the location test over the weekend shared some tweets about the game. [Thanks, Game Jouhou]

According to one player, the location test featured just one stage, but the game is expected to have all of the stages on a full release sometime in Summer 2015.

Another player detailed his first time playing the game, which starts out with a brief tutorial from Professor Elvin Gadd. The first and only stage that was available during the location test has two floors in addition to a “continue” option, if fallen.

The gun controller is basically the Poltergust 3000, which has two options of a trigger that is used to hunt down the ghosts and the flashlight, which presumably can be used to stun the ghosts. The vacuum is then moved left and right to suck up ghosts when they attempt to make an escape. 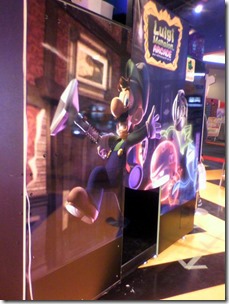 The tip of the vacuum controller is shaped like the one you see on the above image, which the player felt that it would’ve been a little easier to handle and lighter to hold, if it were more of a circular shape.

Finally, the player shared that while moving around, you don’t get to see Luigi, but there are event scenes here and there, which shows Luigi in it, so the location tester said not to worry, Luigi is actually in the game as well.

The Luigi’s Mansion arcade game is expected to launch sometime in Summer 2015.