Disclaimer: I may have misunderstood some parts of how the game works, particularly regarding the Curse Bullet. On the other hand, Mamorukun Curse! doesn’t even tell you much about itself beyond a basic tutorial in Arcade mode. Things like how bullets from cursed enemies turning into candy or being canceleable are conclusions drawn from my own observations. 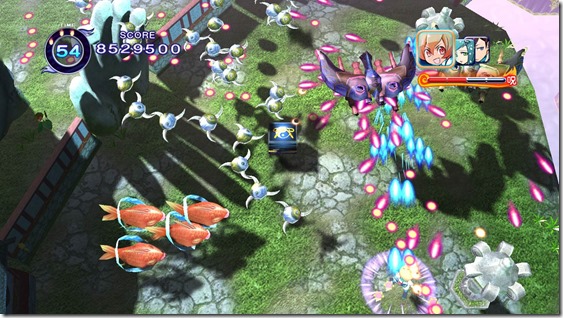 The story of Mamorukun Curse! begins with a young boy named Tomoka Mamoru getting hit by a truck and waking up in a strange place with—wait for it—amnesia. There, he meets three other people in the same situation: Miyuki Mayuno, a softspoken girl; Narai Kin’ya, a young man with a Kansai accent and natural Tsukkomi tendencies; and Higatera Beniko, a witty young woman. They’re all joined by an enigmatic individual, “Jigokudani Fululu” (“Jigokudani” meaning “valley of hell/netherworld”), who reveals herself to be the one who chose and summoned them. Together, they’re to help her combat the Darkness taking over the Netherworld, which she says to be the reason for their amnesia. Thus begins their quest of purifying each tainted area of the Netherworld.

Each character has its own minions, called “Options”—small satellites/orbs/pods that fire extra bullets as well as influence the sort of shots and bullet patterns for each of the four characters.

Mamoru’s Options, spread out to his sides, shoot in the same direction as he does, making a total of five streams of bullets in front. Mayuno is somewhat similar to Mamoru in terms of shot direction; however, unlike Mamoru’s stationary options, they follow her in a trail, adding an element of positioning. 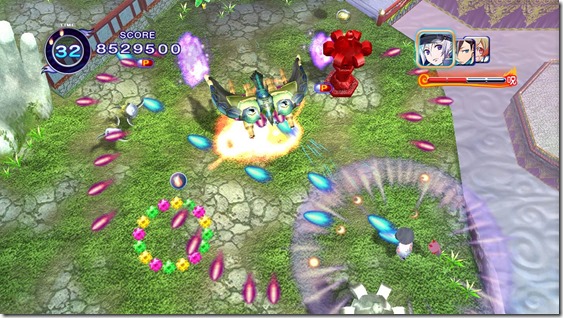 Meanwhile, Kin’ya’s Options fan out to a rather wide arc ahead, so he’s a rather easy character to use. The downside is that, due to spreading his shots, he’s somewhat lacking in power. Beniko is a little like how Mayuno is to Mamoru—a more technical version of an easy shot pattern. In this case, her Options can move back and forth according to her vertical motion; they can cluster in front for a wide arc like Kin’ya, or move to the sides to deal with enemies closing in from left or right.

Finally, Fululu’s Options rotate around her in two orbits, making a wavy shot pattern. Aside from that, she’s about as straightforward as Mamoru.

The PS3 version also contains two more characters who were DLC for the Xbox 360 version: Narukami Luchino and Kinugawa Nowa. Luchino simply shoots out two lines forming a narrow V-shape ahead. The catch here is that his Option shoots out one big bullet after another independently at its own rhythm. Finally, Nowa is probably the easiest character to use: Her option bullets home in on enemies. 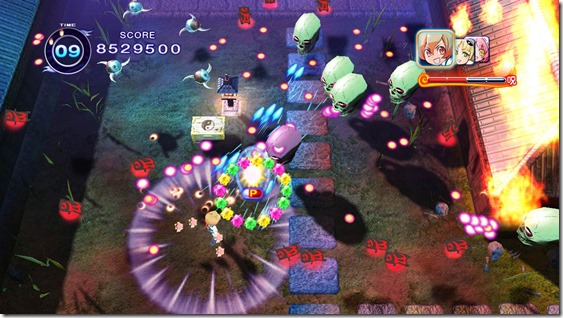 The “curse” part in the title comes from the main gimmick of the game: The Curse Bullet, set to Triangle, X and R1 on the default control scheme. It can be used in two ways: Regular and charged. Tapping the Curse Bullet button leaves a purple curse mark on the ground a short distance in front of the user; the mark doesn’t last very long, but has a very quick cooldown, so another mark can be dropped again almost immediately after it disappears. Enemies that pass through the mark become cursed, which makes them tougher to take down, but also yield colorful candy bits that can rack up a combo. Bullets from cursed enemies also turn “fragile” and can be canceled with your own.

Alternatively, stepping into the mark curses the user themselves and momentarily upgrades their shots and patterns; for example, Mamoru’s options home in and attach themselves to enemies and shoot at point-blank range, while Luchino’s makes his option burst out a rapid and random stream of splash-damage shots. Using the curse this way results in a slightly longer cooldown. On top of these effects, using the regular Curse Bullet erases all bullets on the screen at that very moment too, so I find it to be a rather versatile mechanic.

Charging the Curse Bullet turns it into a giant projectile that can be shot at enemies. It can take out small enemies in its path, and attaches itself to sturdier enemies, making a curse mark there as well as draining the target’s HP. Using the Curse Bullet this way doesn’t delete enemy bullets on the screen like the regular one does, but all their bullets turn into candy bits once they’re defeated. 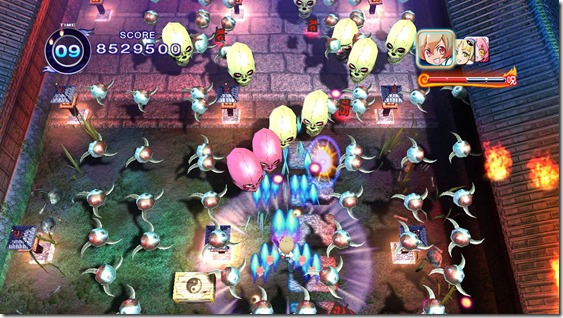 As for game modes, there are Netherworld Adventures (+ Practice), Arcade (+ Practice), and Story. Netherworld Adventures consists of challenges where you have to clear multiple stages consecutively as determined by each “package”. Arcade is self-explanatory; you can pick the standard stages in any order, and progress to later stages once they’re cleared. There are also “missions” where you fight the powered-up versions of bosses of each area—without having to go through the stage again, which helps. Story mode goes through stages in a predetermined order, with dialogue scenes in between. Luchino and Nowa aren’t available for this mode; perhaps they weren’t made into playable characters yet when Story mode was first conceived?

My favorite parts of Mamorukun Curse! lie less in its mechanics (which are already quite simple) and largely in its visuals. In particular, the game doesn’t shy away from using an ample variety of vibrant colors. The 2D illustrations and designs in particular are intricate, as seen in the Gallery that fills up as you play through various modes with each character. I found the boss designs especially interesting, looking like very big and ornate festival puppets, taking inspirations from Japanese folktales and mythology. Of course, character illustrations are quite tidy themselves.

The music is my second favorite aspect of the game, even if the tracklist isn’t long. Many of them are quite high-tempo and, in a way, keeps me up to the pace of each stage. My top favorite track, though, is the title song that can be heard upon highlighting the game in the XMB, “YO-KAI Disco – VOCALOID Edition -“.