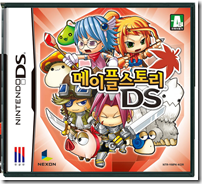 Nexon announced MapleStory DS ages ago. It’s finally on the horizon and scheduled to launch in Korea on April 15.

The handheld version of MapleStory stars four heroes: an archer, mage, thief, and warrior. Each character has their own storyline. Unlike the PC game, MapleStory DS is not an online game. It connects with it, sort of, by including codes for exclusive virtual items.

Nintendo plans to promote MapleStory DS heavily since it’s acting as a launch game for the Nintendo DSi in South Korea. A limited edition bundle with a red DSi and MapleStory DS will be available for 237,000 won ($204). The game costs 39,000 won ($34).

No plans to release MapleStory DS have been announced in any other region so far.