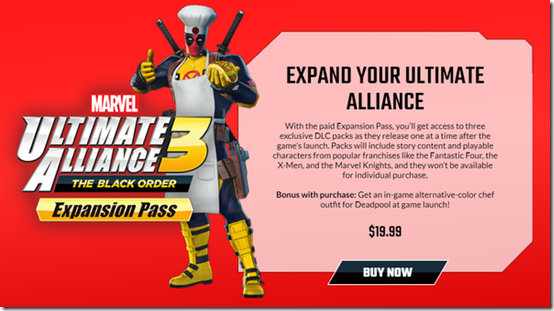 At E3 2019, Nintendo talked about the Marvel Ultimate Alliance 3: The Black Order DLC plans. An Expansion Pass was revealed with heroes from three Marvel teams confirmed to appear. However, the latest update limits how people can get them. It turns out if people want these extra characters, they will only be able to get them through the $19.99 Expansion Pass.

A new description appeared on the official Nintendo website that confirmed the change. It reads, “This paid Expansion Pass includes 3 DLC packs, which will become available as they release one at a time after the launch of Marvel Ultimate Alliance 3: The Black Order and will not be sold individually.“ The game’s website has also been updated with a new image stating the same.

There will be three Marvel Ultimate Alliance 3 Expansion Pass add-ons. The first will appear in Fall 2019, the second will show up later in 2019, and the third will be out in 2020. They will draw characters from Fantastic Four, Marvel Knights, and X-Men. It also comes with an alternate Chef Deadpool outfit.

Marvel Ultimate Alliance 3: The Black Order will come to the Nintendo Switch on July 19, 2019.