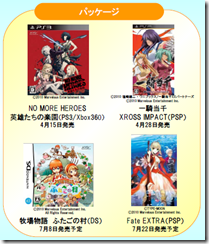 Marvelous, after docking executive pay and selling off Rising Star Games, is scaling back video game development. The Valhalla Knights and No More Heroes publisher only has ten packaged games planned for fiscal year 2011 – that’s the period between April 1, 2010 and March 31, 2011.

Four of those games are for PSP. Delayed games, Ikki Tousen: Xross Impact and Fate/Extra account for half of that number. That means two PSP games are in the works plus two Wii games and two PlayStation 3 titles.

Actually, make that one unannounced PS3 title. No More Heroes: Heroes’ Paradise, which was also held back for the current fiscal year, wrestled its way into stores in April. The No More Heroes port is also Marvelous’ only Xbox 360 game for this year.

So, Marvelous has five games left to reveal. I’m betting one of the PSP games is a Hitman Reborn fighting game. Marvelous releases at least one of those every year. The other four titles – two Wii, one PSP, and one PS3 game are anyone’s guess.