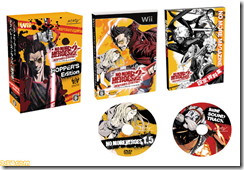 No More Heroes 2: Desperate Struggle is scheduled to come out on October 21. Marvelous is also preparing a “Hoppers Edition” which includes the game, a DVD with a new movie written by Suda51 called No More Heroes 1.5, a soundtrack CD, and a fan book for 8,980 yen ($101). Pre-order No More Heroes 2 and you also get an erotica comic too.

Don’t want the Grasshopper goods? There’s a basic black box version coming out on the same day for 7,140 yen ($81) too.