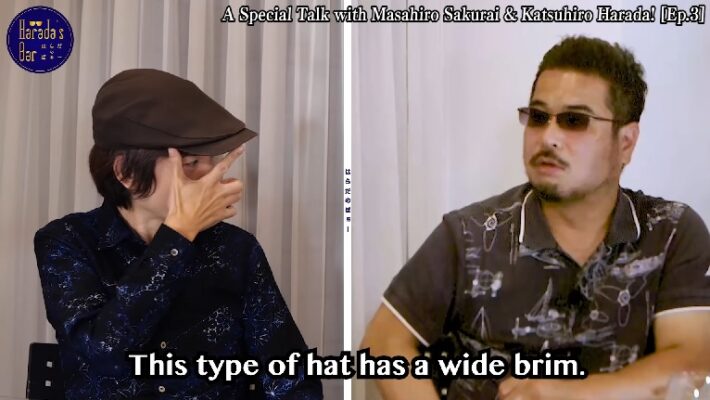 On the August 28, 2021 episode of Harada’s Bar, Katsuhiro Harada continued his interview and talk with Masahiro Sakurai. For the past two weeks, Harada and Sakurai conversed about topics such as retirement, cars, and Sakurai’s enigmatic personality. The video is just under thirty minutes long but here are some highlights from the interview.

Sakurai and Harada agreed that they mostly make games that they themselves would want to play. Sakurai said he is not good at falling puzzle games such as Meteos, but he understands what makes them fun, which is why he is able to make one. In order to understand what makes a game fun and find inspiration for himself, Sakurai plays games in genres that he isn’t good at or doesn’t like. To this, Harada exclaimed that Sakurai and Naoki Yoshida, director and producer of Final Fantasy XIV, are true professionals in a way that’s different than him.

During the Q&A session, Sakurai noted that many foreign fans were asking about Kid Icarus: Uprising. There were also many questions pertaining to Kirby, as well as Sakurai’s health. Sakurai quickly said that he’s feeling all right, though he had stiff shoulders as a result of calcified tendonitis a few years back. He does still have the condition, but other than that, he is okay. Another question asked about the secret to his youthful appearance and while Sakurai said he didn’t think he’s doing anything particular, he did say that he avoids going out in the sun.

The last question that the two touched on asked about the direction of the game industry as a whole. Sakurai noted that it depends on the people who are making games, as they are the ones who are moving the industry forward rather than everyone discussing the direction. However, he does note that if everyone just does what they want, then several genres will become oversaturated with content, as some genres are naturally more popular. One of the things game developers may need to consider is moving away from what’s trendy and popular. When Kid Icarus: Uprising was proposed, games such as Mojipittan–games you can play in short bursts that are supposed to be beneficial for the player’s brain–were popular on the Nintendo DS. Instead of making a game that continued the trend, the team moved the genre to third-person shooter in order to make use of the 3DS’s depth capability.

Next week marks the last part of the Sakurai Masahiro episodes of Harada’s Bar. Harada’s Bar is a weekly talk show in which Katsuhiro Harada of Tekken fame interviews various people from the game industry. It is available with English subtitles on YouTube.