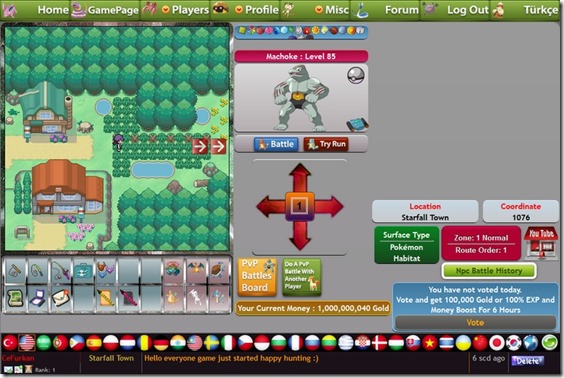 Furkan Gözükara’s thesis project isn’t your typical piece of student work. It’s reached thousands of people, delighting them with memories they’ll probably keep for a long time, and it has been doing so for over five years now. His thesis project is a Pokémon MMORPG.

Gözükara currently lives along the south coast of Turkey, in Mersin, from where he studies a PhD in Computer Engineering at Çukurova University. While a PhD would be enough work in of itself for a single person, Gözükara also runs two large MMORPGs, of which he is head developer.

The first one is his thesis project, MonsterMMORPG, which started out as a Pokémon RPG in 2009, but was later turned into an original game under this new title. It lets people register to capture and battle Monsters in a persistent online world.

The second MMORPG is a fan-requested Pokémon spin-off of MonsterMMORPG, built in the same framework, and is called Pokemon Pets. It’s now the biggest Pokémon MMORPG out there (not that there’s a wealth of competition at the moment). That was put online in the summer of 2014 and has been growing in popularity since.

Siliconera spoke to Gözükara about what it’s like to run these two MMORPGs while still trying to do your PhD work. He also talks about the reason why he launched Pokemon Pets last year, how he’s been working with Pokémon fans and talented artists to improve the game, and how he deals with cheaters who may try to get ahead in PvP battles.

First off, can you give us a brief history of MonsterMMORPG? How long has it been live? How does it work? How many players does the game have?

Furkan Gözükara, developer: MonsterMMORPG was my graduation thesis from my license education (computer engineering) in the summer of 2009. In the beginning it was a Pokémon MMORPG just like Pokemon Pets. However, in 2011 we decided to convert it into a unique game and continue from there. When converting we kept all accounts so players were able to continue where they left.

The game is browser-based and no plugin or download is required to play. You only have to register the game in order to play and only a working email is necessary to register. When registering you choose your starter monster, username, password and overworld trainer sprite. Everything can be changed later at your control panel unlimited times expect username is one-time only. After registration your journey starts at the Starfall Town map. Now you can visit Monster Center, Monster Market, and battle countless amazing monsters to capture and defeat them.

In order to encounter wild monsters, walk around the map on the Monster Habitat surface type, which are usually grass. There are also other types as well such as Cave Surface, Water, Desert Sand etc. Keep pressing the W,A,S,D or arrow keys on the keyboard, and you’ll have more fluent movement. Also, you can keep pressing navigation arrows at the game screen. Changing the number at the game screen movement section will allow you to take multiple steps at once for fast moving. Once you encountered a wild Monster you can either try to run away or battle. Trying to run is dependent on who has the most speed. In the battle screen you choose your moves to attack the enemy monster. You can also switch your monster or use items.

Reading how to play and watching extended gameplay tutorial videos would help a lot to the beginners. Also, you can always ask other players in the game chat or sending them a PM.

MonsterMMORPG currently have 872000 players and keeps growing. Its last month active unique players count is 38000. Actually, we did one- time only deletion of abandoned accounts. Otherwise, MonsterMMORPG would have 1200000+ registered players at the moment.

Pokemon Pets currently has 65000 players because it is a pretty new game when compared to MonsterMMORPG. It started in the summer of 2014. Its last month active unique players count is 15000. 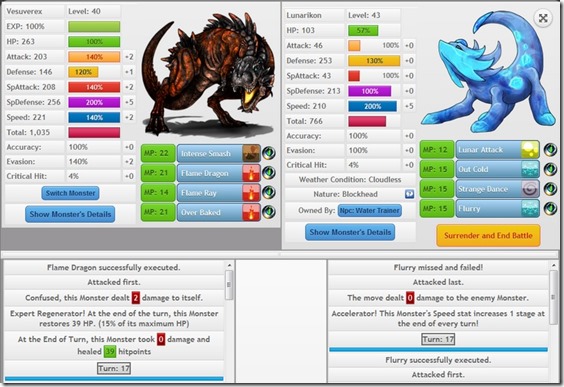 What do you think has made MonsterMMORPG so popular?

MonsterMMORPG became pretty popular due to a true and Pokémon alike MMORPG, meeting the demand for one. Being playable on basically every platform that has browser and internet connection is another reason. This lets people to play even on very old computers and restricted computers.

Another reason is every action is saved and checked at the server side, which enables you to continue or stop playing any time, preventing any possible cheating possibilities. Also the game system does not force you to grind every day. You do not lose anything when you do not play.

So, last year, you decided to create Pokemon Pets, which is completely free, with the MonsterMMORPG framework. Why? What was the driving force behind this decision?

I had a difficult time when deciding whether to start the Pokemon Pets project or not. We were getting so many players from the Pokémon fan base requesting another game that used Pokémon instead of Monsters. I couldn’t resist this demand: these people have a history with Pokémon and they love to see them, and they are more familiar with Pokémon than any new monsters.

Having both games at least gives people the opportunity to choose. Those who might be bored with Pokémon and want to see new stuff can play MonsterMMORPG, while those that want to bring back some good memories can play Pokemon Pets now.

Aside from the obvious, are there any major differences between MonsterMMORPG and Pokemon Pets? Let’s say, in terms of how they each play?

In MonsterMMORPG, upon encountering a wild Monster, three random abilities from that Monster ability pool and one random nature is assigned to that Monster. In Pokemon Pets, we pre-assigned abilities to each Pokémon that would most represent and feel like original abilities. But we did not code original abilities as it would require too much additional time.

How much have you worked with Pokémon fans and artists when creating Pokemon Pets?

Well, it definitely took a while to make preparations for Pokemon Pets. Maybe we can say that it was at least 3-4 months before we started out with the very basic version. First we had to prepare all Pokémon data, structured to be read by our special software, and then load it into the database. All Pokémon moves also had to be prepared with their effects. Then their abilities had to be determined. And one of the most challenging parts was modifying the source code of MonsterMMORPG.

We started out at the beginning with just the first 151 Pokémon, and later made further additions. Currently, Pokemon Pets has whole Gen 1, 2, 3, 4, 5 and 6 (a total of 721 Pokémon). We also have shiny forms of each Pokémon, which are harder to find and have more stats. Only a few forms and Mega forms are missing.

And I cannot continue without mentioning how hard it is to find high quality artwork of Pokémon. We are mostly asking talented artists who have already drawn Pokémon artworks to get usage permission, ensuring that we give them proper and full credits. And, each time, full credits are also given to Pokemon’s true owners, Gamefreak and Nintendo, as well. Through contributions by talented artists we will have the best artwork quality in a complete Pokédex on the internet. 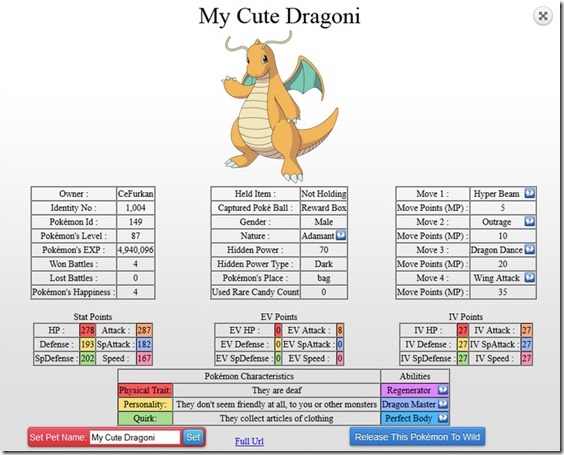 How are you avoiding the violation of any copyrights and trademarks with Pokemon Pets?

Pokemon Pets, at its core, is no different than any other Pokémon-related websites that display and use copyrighted Pokémon materials. For example, this includes Bulbapedia, Serebii, Smogon, IGN, Pokémon-related forums, Psypokes, Wikipedia, Reddit, PokémonDB etc… We do not sell anything in the game and we do not even accept donations toward the game. So, basically, this game is truly 100% free and every player is equal. And by no means is Pokemon Pets an alternative or competitor to the original franchised games.

We also intend to use as few official Pokémon copyrighted images as possible (eventually planning to make it zero). Our entire map system is unique, almost all of the items are unique, icons are unique, and most of the used Pokémon artworks are fan-made from different artists. We are planning to complete the whole Pokédex with high quality fan-made artworks, and with that we will have all unique artworks being used in the game. Our aim is not to incur copyright infringement or anything along those lines. Our aim is providing Pokémon fans an enjoyable time.

There are a lot of Pokémon fan games out there, as I’m sure you know. What makes Pokemon Pets different to others? Why should people play it?

We also have advanced filtering and sorting options at every area of the game such as the Pokedex, Game Maps, Market etc. And a well-planned top trainers ranking system, as well as a monster catch/battle/level system. Basically, while providing an experience similar to the original games, we are making Pokémon available to its fan base as a MMORPG. 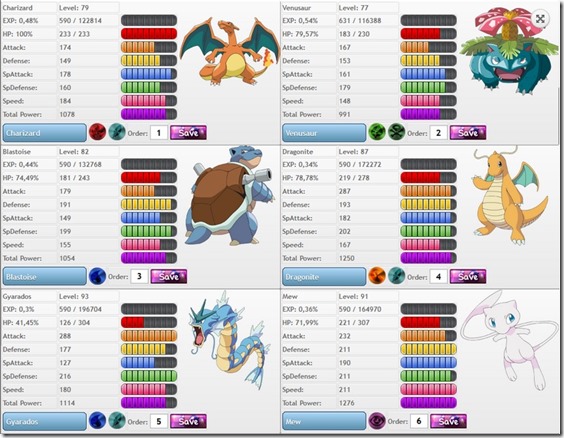 Do you have many cheaters to deal with in either of your games? How do you deal with cheaters?

My policy towards cheaters is not catching them but preventing them to cheat in the first place. As often seen in other MMORPGs, catching cheaters will only punish those that got caught, but not those that still get away with it, and will incite unfair gaming among other players. So we take every measure to prevent cheating including anti security questions that appear in the game in a way that shouldn’t bother players. We’ve also designed the game mechanics so as to make it almost impossible to cheat with scripts. I can say with confidence that our game is the purest game among online Pokémon titles, that is, without cheaters.

What do you have planned for the future of MonsterMMORPG and Pokemon Pets? Any other games in the pipeline?

My primary aim is to become a computer engineering professor at the university. However, I am planning to continue to develop both games as my hobby. MonsterMMORPG is, and will continue to be, the primary game as it is the unique, real, and official game. However, any updates that come to MonsterMMORPG will probably also come to Pokemon Pets. So I am planning to develop both games in a synchronized fashion, pretty much.

No other games are planned at the moment, but Version 3 of MonsterMMORPG has been planned for a long time and very much awaited. However, I have recently been pretty busy with my PhD thesis work, so I haven’t found time to complete it yet. Hopefully, if we can manage to complete it, that update will bring awesome new features such as a completely new and superior interface, a guild system, friends system, live private chat system, PvP maps system, live PvP tournaments system, an achievement system, a rewards system, and many more.