The tale of Melty Blood: Act Cadenza is almost hilariously convoluted. What started off as a porn graphic adventure for the PC known as Lunar Legend Tsukihime, was turned into a homemade (or “doujinshi”) fighting game called Melty Blood by a company called French Bread. Now, most Japanese doujinshi fighters are pretty subpar, sticking in tons of doe eyed schoolgirls in place of actual quality gameplay, but this one actually turned out to be pretty decent. Instead of suing them, like most copyright holders would do here in America, the company behind Tsukihime officially licensed the game and brought it out to Japanese arcades. Melty Blood: Act Cadenza, the latest attempt to jam a bunch of nonsensical English words in a title, and the most recent iteration of the series, has arrived the Playstation 2, which is a much more suitable platform than the PC. 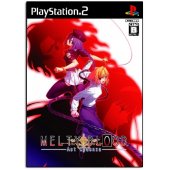 I’m not remotely familiar with the story or characters of Tsukihime, but there sure are a lot of female characters – which makes sense, given its roots. The character roster has some interesting characters, including a girl wielding a deadly whip named Sion, a nun with Vega-like claws named Ciel, a pair of maids named Hisui and Kohaku (as well as a mecha variaton on one of them), a tiny little blue haired gothic lolita named Ren that can change into a cat, and a beastly dude with the nigh-unpronouncable name of Nrvnqsr (although the katakana reads “Nero”), who has a gigantic demon living in his chest and can summon vicious deer to run around the screen. Beyond that, the character designs aren’t all that interesting – there’s Generic Guy, same looking Generic Guy but with a knife, Schoolgirl with Blond Hair, Schoolgirl with Brown Hair, and…you get the idea.  Even some of the crew looks a bit generic, they all play differently, despite the movesets of everyone being practically identical. The selection screen shows a total of sixteen characters, but that number is drastically inflated – Melty Blood appears to be running some kind of competition with Mortal Kombat for the number of palette swapped characters, because many of them are just variations using similar sprites (i.e. an “evil” or “vampire” version of certain players.)

If you’re familiar with the Guilty Gear series, you’ll fit in right at home with Melty Blood. There are only three attack buttons (weak, medium and strong), but it’s extremely easy to create long chains of custom combos, and most moves can be super cancelled into special attacks. While this makes it easy to pick up and play, it can also lead to a lot of button mashing – the game ever tells you to slam the buttons after getting hit so you can recover and minimize damage. Super moves are even easier to execute than usual, since you just execute a regular attack motion using the strong attack button. It’s a very simple pick up and play game, but there’s enough substance so anyone who knows what they’re doing can easily beat any scrubs.

There’s your standard power meter at the bottom dubbed the “Magic Circuit”, which can also be used to enter “Heat” mode, where you can execute more special attacks (called Arc Drives) and even regain a bit of health. You enter Heat mode automatically if the bar fills up, in which case you can enter an even more supercharged mode dubbed “Blood Heat”, which in replenishes health even faster and allows execution of even crazier special moves, not to mention some badass counterattacks. Naturally, these are some of the coolest parts of the game – the dude with the knife, Nanaya, slows down time and attacks the throat of his opponent, while Ciel tosses off her nun habit, attacks with a gigantic laser gun and impales her foe on the bayonet.

Each character also has a set of runs, air dashes, and double jumps, leading to some quite frantic matches. You can also execute a special guard attack by holding down the triangle button, which saps your power meter but can stop your opponents mid-combo. It’s meant to be a variation of the Street Fighter 3 parry system, and it’s a bit hard to use effectively, but if you can execute some of the counterattacks, it can be devastating. The default damage is a little bit low, but it’s easy to fix to fights don’t drag on for too long. The artificial intelligence is also generally decent, although it spikes drastically for the mid-boss and final battles.

Melty Blood occasionally shows its amateur roots, especially in its presentation. The backgrounds are sparse and boring, and the music runs the gamut from awful Marvel Vs Capcom 2-style jazz to boring rock. All of the post-battle taunts are voiced, although the endings are unfortunately quite sparse. It also has one of the most obnoxious menu select screen noises I’ve ever heard. The sprites are all horribly pixellated, and some kind of filter to smooth them out would’ve been greatly appreciated. On the plus side, the sprites are extremely well animated – maybe not to Garou: Mark of the Wolves level, but far better than Guilty Gear X.

All of the menus are in English. The sparse storyline segments and the movelists, however, are in Japanese.

2D fighters rarely make it to America, especially ones based on licensed properties that no one outside of anime conventions have ever heard of, so it’s quite unlikely.

Overall: Melty Blood doesn’t quite have the variety that other fighters have been afforded through years and years of polish, but it is pretty fun, and has seen enough revisions during its life as a PC game that it’s fairly well balanced. And with the lack of quality 2D fighters around (except for the ones SNK is still pumping out), pretty much anything that’s remotely competent is welcome, and Melty Blood more than easily fits the bill. It’s also much easier to play on the PS2 than the computer – the original game and its upgrades are rather hard (and expensive) to find nowadays, and sitting in front of a TV with two controllers much better than huddling in front of a computer monitor.

By Alistair Wong1 hour ago

By Lucas White2 hours ago

By Alistair Wong3 hours ago