The latest Metal Slug on the Playstation 2 betrays its 2D roots by moving the game into the third dimension. However, you’ll notice that there’s no “3D” in the title – the game is, simply, “Metal Slug”. Why? Because, by all tokens, this game should not exist. The Metal Slug series, a humorous take on side-scrolling arcade games, was one of the few bastions of 2D gaming, showing off extraordinarily detailed sprites with gorgeous, fluid animation, which seemed to be thumbing its nose at those newfangled “polygons”. But time marches on, and SNK needs to compete. Plenty of other series have gone 3D, with varying results, although few held out hope for Metal Slug, given the early preview trailers. However, the recent King of Fighters Maximum Impact games were actually pretty decent, I figured that the new Metal Slug might be, at the very least, competant. 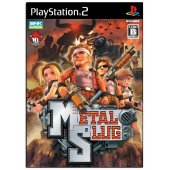 They didn’t quite succeed. However, it definitely could’ve been worse.

The graphics are kinda ugly. The characters models are meant to be 3D representatives of the vaguely super deformed sprites in the original games. The problem is, they end up looking more creepy than endearing, the same problem that affected Square’s Romancing Saga remake when they tried the same thing. The mechanical creations – the tanks, the airplanes – end up looking much better. The environments are sparse, undetailed, and ultimately pretty dull.

At least the controls are decent. By holding down the R1 button, you’ll instantly target anything in sight. You can enter a room, hold down R1 and keep hammering on the fire button, and you’ll eventually kill everything in sight. For the most part, all you need to do is keep firing and make sure you don’t get hit by enemy fire – the game is even polite enough to indicate where cannon fire to going to hit. This system works most of the time, except when trying to target skyborn enemies, in which case the camera goes all to hell. Certain weapons, like the rocket launcher and the laser, need to be aimed manually, which makes them far too difficult to use in most circumstances.

Curiously, the weapon system has been completely overhauled. Instead of just picking up weapons to replace whatever you’re currently equipped with, you stockpile ammunition every time you snag a power up. You can then scroll through available weapons by hitting L1 and Square at same time, which is unnecessarily cumbersome. Your weapon supplies carry over from level to level, and given that weaponry power ups are somewhat limited, it’s rather strange that the game emphasizes conservation when it should be emphasizing as much destruction as possible. Grenades are rare, and your pistol is pretty weak, so you spend too much of the game way too underpowered.

That’s not the only instance where the game just doesn’t “feel” like Metal Slug. Instead of simply running and gunning through levels, you’ll often find yourself encased in an area until you’ve defeated all of the bad guys. There’s a separate button to activate your melee attack – it won’t activate automatically anymore. You start the game with only Marco, but eventually you can recruit the whole gang of Tarma, Fio and Eri. Each of your characters can be upgraded by spending points obtained by killing foes, although they take a long time to build up. The one-hit kills are gone (despite some obnoxious pits), as you can take approximately four hits before dying. Running out of life will also send you back to the beginning of the last checkpoint – most stages have several of these, so you probably won’t have much of a problem beating the game. Some of the stages are only a few minutes long – others can last for up to fifteen minutes, depending how fast you try to blow things up, or how much you want to explore for hidden stuff. The biggest downfall is the lack of any kind of multiplayer.

There are, of course, the titular Metal Slug tanks to be found at key points throughout the game. It’s impossibly difficult to control and almost entirely useless. You can recolor your Slug in the garage or upgrade various aspects via the use of colored bricks littered throughout each stage, but it’s entirely pointless and feels tacked on. There are a few vehicles stages, where you take control of an airplane or a submarine, but they come off as poor clones of Panzer Dragoon.

It’s clear that the designers were pretty large fans of the Metal Slug series, because there are a lot of little touches interspersed through the game – your characters swig water or reload their ammunition when not firing, and most of the levels take you through familiar territory (a European village, an Arabian city, an underground ruin filled with zombies, etc.) There are also plenty of cutscenes inbetween each level detailing the story of the Peregrine Falcons (your troop) versus the evil General Morden. Again, just the fact that there’s an actual storyline in a Metal Slug, with plenty of dialogue (in full English, no less), feels pretty strange. At least the soundtrack, provided by Toshikazu Tanaka (who did the music from both Maximum Impact games, as well as Metal Slug 5) is quite decent, even if it’s often subdued underneath the constant sound effects.

All of the menus and cutscenes are fully in English, with Japanese subtitles. The only (minor) issue are the “mission objectives” that appear midlevel, although they’re rarely more varied than “kill everything”.

SNK hasn’t expressed any interest in bringing Metal Slug to America, which is curious, given that it’s one of their flagship products, and the game is already in English. The game is coming to Europe care of Ignition Entertainment.

Overall: Metal Slug isn’t nearly the train wreck we all expected. At times, it manages to emulate the same chaotic action that made the original games so fun. Unfortunately, more often than not, it just ends up as a pale imitation, and the overall result is pretty mediocre – it’s more like they took a generic shooter and shoved in a few Metal Slug elements. At least there’s still the 2D Metal Slug 6 to look forward to.