When you get a Metal Slug game, you pretty much know what you’re getting into. Running forward! Jamming on the fire button! Jumping and stabbing and oh-so-much exploding.  Up until this point, there has been no such thing as a “bad” Metal Slug game (at least, in the realm of 2D), but there have been ones that are subpar for the course. Metal Slug 3 has pretty much been the pinnacle the series, and the fourth and fifth installments have pretty much been “The Same, But Not As Good” – we’ll call this the Mega Man Syndrome. In some ways, this is what the fans want – the recent 3D reinvention was met with almost universal apathy – but it has begun to feel like the later installments are just unnecessary. 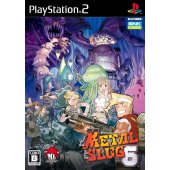 Metal Slug 6 is the first (and will be the only) game based on the Atomiswave hardware, so SNK had the opportunity to really put the hardware to use and show off more of the crazy sprite work they’ve been known for. They didn’t quite pull it off. While you can look at The King of Fighters XI and see a definite (albeit relatively minor) improvement over the Neo Geo versions, Metal Slug 6 barely looks much different. The backgrounds are supposedly high res, and they’re all prerendered backgrounds as opposed to the tiles from the older games, but they look pretty bland and boring. Plus, the sprites are exactly the same as they’ve always been. The visual improvements are only applied to the boss fights, which are probably the best part of the game – the second stage features a giant tank, rolling down an infinite mountain, launching missiles so huge that the camera needs to zoom out just so you can see everything. Later bosses are equally cool, including a huge robot controlled by a brain in a jar, and a worm that squirms around the screen with some impressively sprite rotation effects. Granted, we’ve been seeing these effects in 2D games for a long time now, but this is the first time we’ve seen them in a Metal Slug game.

Alas, the same attention to detail hasn’t been lavished on the rest of the game. Most of the levels are pretty dull, consisting of the usual mountain scapes and wrecked cities. There’s a new set of bad guys to fight, which are some evil insects that are apparently living underneath the earth’s crust. This leads to a final stage where you can rescue captured Mars People and have them gang up on a universal foe. It also a features a painfully boring Dig Dug-esque segment in “Drill Slug”, as you slowly burrow into the ground and try to shoot stuff in the meantime. There are a few (well hidden) alternate routes throughout the game, one of which leads to a shooter segment where you get to control the final boss of Metal Slug 3, which is just as cool as it sounds and completely cancels out the lameness of the drilling segment.

Even though the level design is just going through the motions, SNK actually decided to mix things up a bit and give each character their own abilities – Fio, for example, always starts with a heavy machine gun after getting killed, Marco has an extremely powerful pistol, and Eri has double the amount of grenades by default, plus she can throw them farther. They’ve also added Ralf and Clark (from Ikari Warriors and King of Fighters fame) to the roster, and they fit right along with the rest of the cast. Ralf can take two hits before getting killed, and can use his Vulcan Punch for some devastating melee attacks, but the ammo on all of his weapons are halved. Clark can execute his Super Argentine Backbreaker, which tosses a foe straight into the air and grants your character temporary invincibility. Now you actually have to think about what character you want to use when you continue, and need to alter your playing style based on that.

There are other minor modifications to the system as well. You can hold two weapons at once and switch between them, a la Contra 3. There’s also an Easy mode which gives your characters unlimited access to a Heavy Machine Gun, but the whole game stops at the end of Level 4. There’s not much in the way of new or interesting Slug machines, but there’s a new weapon called the Zatoichi, which is a sword that can cause huge damage at close ranges. For the high score junkies out there, there’s now a combo meter in place, which will cause enemies to explode with coins when it’s maxed out – the more coins you grab together, the higher bonus score you get.

The soundtrack is a pretty mixed bag. The hard rocking music from Metal Slug 5 is gone, replaced with a few different styles – the first two levels are reminiscent of older themes, while the third level features a Chinese-influenced dance song and the fourth features an orchestral BGM that would feel at home in Final Fantasy Tactics. At least the general sound quality is much higher than it was on the Neo Geo. All of the songs were composed by Manabu Namiki, who’s also worked on several Cave shooters, but ultimately doesn’t come up with anything too interesting.. The sound effects are all pretty much the same, although they’re finally changed the voice of the captured hostages, so it matches what they sound like in Metal Slug 3D.

Being that Metal Slug 6 is only five stages long – and with unlimited continues, can be beaten in approximately forty five minutes – SNK added the Combat School mode to the PS2 version, which has also appeared in past Metal Slug ports. SNK makes a big deal out of the female characters used to host these seminars, for some reason, but the meat of the gameplay just revolves around completing certain missions in the various stages – it’s nothing too worthwhile. However, there is a gallery filled with over 300 pictures from the whole Metal Slug saga, as well as a sound test featuring music from every single game in the main series, seven altogether. Considering that a CD box set was just released containing the same music for approximately $120, this is an easier and cheaper way to listen to some of the music, as long as you don’t desperately need it on CD. The violence setting is off by default, but can be switched on if you so desire to see blood squirt out when you shoot something.

Other than the names of the rescued comrades at the end of each level, there’s almost no Japanese in Metal Slug 6. The few “story” sequences don’t contain any dialogue, and the menus are in English.

Not anytime soon. Although Metal Slug is one of SNK’s premier series, SCEA has forced the company to release the games in bundles, and unless they stick Metal Slug 3D together with this, it’s unlikely. Still, we’re seeing the Metal Slug Anthology (which unfortunately will not contain Metal Slug 6) released for the Wii and PSP by the end of the year, so it’s possible we’ll see it in some other form.

Overall: If you’re tired of Metal Slug, this one certainly won’t go out of its way to convince you otherwise. Still, it’s better than Metal Slugs 4 and 5, although it still doesn’t quite hit the highs of the third installment. It’s also comforting to sit down with a new 2D shooter in the days of high powered high def next gen gaming, and Metal Slug 6 fills in that niche quite comfortably.