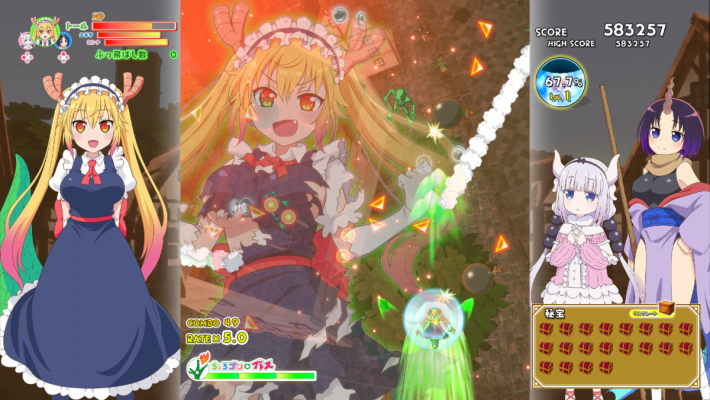 We now know the Miss Kobayashi’s Dragon Maid: Burst Forth!! Choro-gon Breath Switch and PS4 game release date. Aksys said people will see it outside of Japan on August 25, 2022. It is going to be available digitally and physically. There will also be a first-run bonus for people who get a retail copy.

Should people get a physical copy, they will also get a Weiss Schwartz trading card. This will feature Tohru, Kanna, Elma, Kobayashi, and Lucoa on it. The card will be entirely in Japanese and can be used with the game. There’s also already art for it available.

For those unfamiliar, the Miss Kobayashi’s Dragon Maid game is a shoot’em up starring the dragons from the series. The computer at Kobayashi’s coworker Takiya’s house is essentially cursed. When the group goes to investigate, they’re pulled inside. This means characters like Tohru, Elma, and Kanna need to fight back in stages to survive and escape. You’ll also earn Memorial Pieces with memories from happier events with the characters as you do.

The Miss Kobayashi’s Dragon Maid: Burst Forth!! Choro-gon Breath release date for North America is August 25, 2022. It will be available on the Nintendo Switch and PlayStation 4. The game is immediately available in Japan.