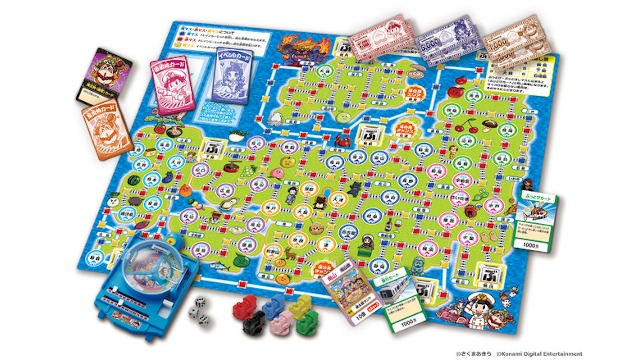 Takara Tomy will release A new board game based on Momotaro Dentetsu: Showa Heisei Reiwa mo Teiban! in October 2021 in Japan. It will allow players to physically enjoy the popular Japanese game where you become the owner of transport companies. The game’s general objective is to travel around Japan and gather wealth by buying properties in various cities.

The package will contain a map board, six differently-colored player pieces, three dice, gameplay cards, and sheets of in-game money. It will also come with a specially designed Train Roulette device that can double as a turn counter with adjustable year and month markers.

Using all of the items included in the package will let players simulate the original gameplay system of the latest Momotaro Dentetsu video game, including the encounter against the God of Poverty. However, people can also opt to play the board game entirely without the notorious deity.

The board game will also allow other gameplay modes not seen in Momotaro Dentetsu. For example, players can hold a simple race from the northernmost station in Hokkaido to the southernmost location in Okinawa.