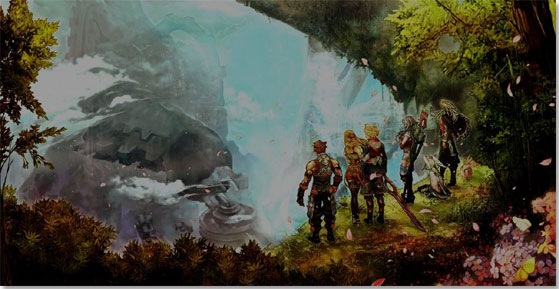 While writers Takeda and Takahashi have the same interests (books, movies, etc.) they often had differing opinions about them. This actually worked out rather well when it came to developing Xenoblade’s plot. It made things easy to discuss because each instinctively understood what the other was getting at, and it also allowed them both to propose ideas completely different from each other’s. And when they couldn’t figure something out, Nintendo staff was happy to zero in on the exact problem that both Takahashi and Takeda had missed or happened to encounter a writer’s block at.

The meetings were weekly, every Thursday, a pace that was one Takeda was already used to due to the anime industry, and one that allowed problems to be cleared before they could pile up. This continued for one year before the script was completed, and by the end, no one could tell whose idea was whose, and all for the better.

One of the main points Takeda focused on was the protagonist, Shulk. He is the one character most intimately connected with the player, since you control him. As such, Takeda conjectured that he would also be the easiest for the player to dislike, if he didn’t act the way the player expected him to, or said something the player wouldn’t. The goal? To create a protagonist that wouldn’t be disliked.

One of the solutions to this ambitious goal is to create a silent protagonist, but Takahashi wasn’t having that. He wanted to find another way to make the characters resonate with the player. In fact, by the end of development, there was not one character in the game that could be classified as the “silent type.” This could even be seen in the battles, where your party members constantly cheer you on. He felt that this constant interaction made them resonate better with the player.

Another goal was depth. The world enormous. Colony 9, which is where Shulk picked up the legendary Monado, could have been the setting for an entire game in and of itself. Not only was it large, it was filled with content as well. No matter where you went, there was always something waiting -– a story event, a quest, or simply strong, boss-like monsters. Sometimes, according to Takahashi, there were even spots where you would (ideally) just stop and gaze around and go, “Wow. Places like this exist too?”

In fact, some game events were designed around this idea of “stopping to smell the roses.” The development staff was especially astonished to receive the instructions for one quest: “Collect 400 of this item.”In fact, the development staff compiled together 400 quests, something that even Takahashi was astounded at, in hopes that the player would want to explore more of the world.*

When asked to define Xenoblade, Takeda replied that he would like people to think about the “macro vs. micro” perspective; the enormous size of the world vs. the tiny person that you are. As for Takahashi, he said that one of the main focuses of the game was the growth of the protagonist — that it was, in a word, a journey. He was heading for an unknown future in an unknown land, and one of the most important parts in the game was that he was always moving forward.

*Thanks to Amiiy for pointing out the error.