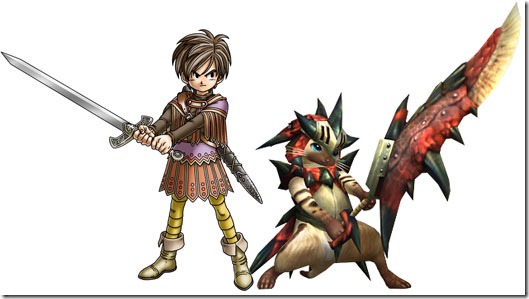 The current Japanese games market has three series that people will bend over backwards to play — Pokémon, Dragon Quest and Monster Hunter. In recent times, the latest instalments in each of these three franchises have seen some sort of an upgrade or a significant change to keep things fresh or help attract more players.

We decided to compare the first month sales for all three titles. The results? In four weeks, Pokémon Black/White sold 3.9 million copies. Dragon Quest IX moved 3.38 million. And Monster Hunter Portable 3rd, in a surprise twist, outsold Dragon Quest, coming in at 3.56 million. Here’s the breakdown of sales by week:

The reason? Perhaps it was that Portable 3rd’s sales were sustained better by releasing so close (December 1st) to the holiday season. Christmas and New Year tend to significantly boost the sales of games that are heavily in demand. Poor Dragon Quest IX, on account of releasing in the middle of summer, received no such almighty boost.

The key figures here are the third and fourth week numbers for both games. Monster Hunter Portable 3rd sales appear to be receding at a slower pace than those of Dragon Quest IX did. This is the trend to watch for, to see if it holds up. Maybe in another month or so, we’ll have a better idea of whether Portable 3rd really is on its way to outsell Dragon Quest IX in the long run.