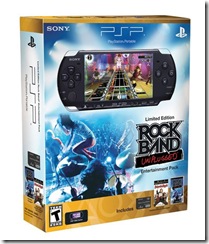 Ars Technica’s mysterious mole claims the UMD-less PSP Go! and a slim PlayStation 3 will be in stores later this year. While both products are remain rumors, Ars Technica procured early information about the red Resident Evil 5 Xbox 360 bundle and disc-less Patapon 2.

The site explains the PSP Go! won’t make the PSP-3000 obsolete right away. Both models will be sold side by side similar to the Nintendo DS and Nintendo DSi. Should we expect more PSP-3000 entertainment packs?

Chances are Sony will make the PSP Go! official during their press conference, but Ars Technica says the slim PS3 wont be at the show. The revised hardware, which may have been leaked from factory photos, wont come out until September-ish and Sony has plenty of existing PS3 phat stock to exhaust before announcing a slim model.