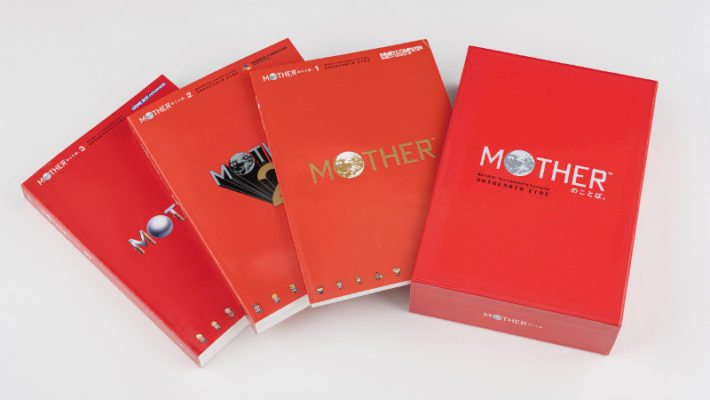 Hobonichi revealed the release date for Mother: The Complete Scripts. The full set of script books from the Mother trilogy will be available publicly in Japanese book stores on December 25, 2020 at a price of 8,888 yen. [Thanks, 4Gamer!]

Mother: The Complete Scripts will contain every quote and message from all three Mother games, including all variations from dialogue branches and item explanations. It even will include unique quotes from each platform release, as Nintendo released a compilation of the first two Mother games on Game Boy Advance in 2003 in Japan.

Mother: The Complete Scripts will also be available for early purchases and viewing at Hobo Nichiyobi on the 8th floor of Tokyo’s Shibuya Parco. The Hobonichi-owned store will hold a temporary Mother Shop from December 14, 2020, to January 11, 2021. Every purchase made of the set at this limited-time shop will come with a bonus Mother sticker book.

Hobonichi also has its own online store that will put the script books up for early sale on December 14, 2020. It also supports overseas shipping with FedEx International Priority.

Mother: The Complete Scripts will contain scripts from all three Mother titles released to date. The first game was released in Japan on Famicom (NES) in 1989; it was later localized worldwide as Earthbound Beginnings for the Wii U Virtual Console in 2015. The second one launched for the SNES in Japan in August 1994 and North America—where it was known as Earthbound—in June 1995. Mother 3 launched for Game Boy Advance in April 2006 in Japan, yet it still has not received an official English release so far.