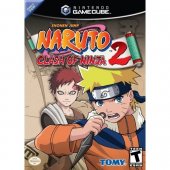 The anime series in a place where a bunch of characters have been introduced and Naruto: Clash of Ninja 2 adds in all of the fighters from the Chuunin exam. This is the first time in a North American Naruto game where you can play as Kiba, Ino, Guy and Kankuro. There are 23 characters in the game including some alternates like Nine Tails Naruto, but we’ll forgive that since Akamaru, Kiba’s dog is a playable character. Eighting has gone to great lengths to give each of the 23 fighters their traditional moves from the series. Remember when Kakashi pulled Sasuke into the ground with the headhunter jutsu? That’s in the game. Or when Kiba did his signature fang over fang technique against Naruto in the chunnin preliminary matches? You can do that too. Naruto: Clash of Ninja 2 gets high marks for fan service.

While you can do Neji’s 8 trigram palm rotation, use Hinata’s gentle fist and play with Kankuro’s puppet crow the fighting system for doing all of these moves is extremely basic. The b button is used for taijutsu (hand to hand combat) and the a button is for ninjutsu or ninja tools. Eighting has some creative control schemes for unique fighters like Kankuro and Kiba. For Kankuro, the a button controls his puppet while the b button is used to punch and kick. Kiba has his wild somersault combos mapped to the b button and he can call Akamaru to attack with the a button. For Lee, who has no ninjutsu attacks, the a button is for signature moves like the leaf hurricane. Gaara, who controls large mounds of sand has a unique style compared to the other fighters. He’s a slow tank, but his sand attacks cover a wide area to trap players into combos. While you could spend time to master combos and memorize special moves, Naruto: Clash of Ninja 2 is just as easy to play if you don’t know anything about the game. The fighting system is so rudimentary that nearly anyone can button mash their way through a hard hitting combo. The major skill to learn in Clash of Ninja 2 is when to use the substitution jutsu. After dealing and taking damage the chakra gauge will fill up. When it is ¾ full you can do a substitution jutsu by tapping R or L to instantly evade an enemy attack and launch a counter offensive. If you’re low on chakra you can still reverse attacks with proper timing. By pressing back+A you move into a reversal stance (Naruto’s is the sexy jutsu and Neji’s is for the eight trigram palm rotation) where if you’re hit you launch a counter attack.

Even though Naruto: Clash of Ninja 2 doesn’t have a lot of complexity it is still a whole lot of fun to play with four players. During four player fights you can set up teams, go for a three on one fight or have every ninja battling solo. Four player bouts have automatically set a linear path between you and a targeted opponent. If you want to wail on another ninja you can press the Z button to switch your target. Once you have your sights on your opponent you can throw kunai from a distance or jump into the action with taijutsu combos. Besides four player and versus combat Naruto: Clash of Ninja 2 has a twenty plus episode story mode that begins with Naruto battling Iruka sensei all the way to episodes beyond the chuunin matches. Many classic fights are featured, mainly with Naruto, but you will get to do other major bouts like Lee versus Gaara and Hinata versus Neji. Once you beat the story mode you will be able to unlock additional story missions in the shop. Hidden in the game is a nifty mini game where Naruto can knock around shadow clones just like in the episode where Naruto, Sasuke and Sakura are surrounded by ninja from the Mist village.

You’re going to need to master the shadow clone mini game and take on all of the modes in Naruto: Clash of Ninja 2 to unlock all of the secrets in the Anko’s shop. New story missions cost about a thousand coins and new characters can run up five digit coin numbers. Naruto fans will want to unlock everything like the ninja info cards and bonus stages, which will extend the longevity of Naruto: Clash of Ninja quite a bit.

If you’re looking for a Naruto game to turn on and start fighting, Naruto: Clash of Ninja 2 is a clear choice to get. Four player combat, twenty three characters and 3D fighting what else would a Naruto fan want?

+ Pros: Tons of playable characters and four player battles make Naruto: Clash of Ninja 2 a huge improvement over its predecessor.

– Cons: On the other hand she classic characters from Clash of Ninja have little to no improvements. Also hardcore fighting game players might find Naruto: Clash of Ninja 2 on the simple side.

Overall: Fans will dig the story mode in Naruto and the four player fights. Plus there are plenty of unlockables to keep Naruto: Clash of Ninja 2 in your Gamecube for months to come.

Stuck on Naruto: Clash of Ninja 2? We started a tip thread for the game. Read up on strategies and post your own!

And now for the winners of our Naruto: Clash of Ninja 2 Contest…

If you’re one of the winners please contact us at [email protected] to verify your e-mail address and so we can mail your prize out.Thanks to everyone that entered and if you didn’t win this time stick around for our next contest!