New entries in the Gamecube library are dwindling, but there are plenty of games still lingering in localization limbo. One such series is Eighting’s Naruto: Gekitou Ninja Taisen series, a 3D fighting game modeled after the anime series. Now that the orange ninja has made his way over to the USA via Viz Media D3 Publisher snatched up the rights to the GNT series and renamed the series Naruto: Clash of Ninja. D3 Publisher hopes that Gamecube exclusive fighter will be a hit in the USA like it is in Japan. 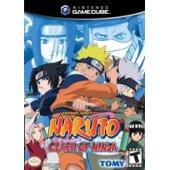 Naruto: Clash of Ninja follows the anime series from the very beginning. In the story mode you’ll play as the mischievous prankster ninja, Naruto. His long term dream is to become the hokage, the head ninja of the village hidden in the leaves. But we’re not there yet, we’re at stage one where a youthful ninja has to deal with his rival Sasuke Uchiha and his love interest Sakura Haruno. They’re led by the aloof, but strong jounin Kakashi Hatake as they enter the land of waves. The game’s story mode is on par with the Cartoon Network broadcast to date. You’ll battle all the way up to the end of the first story arc on the great Naruto bridge. The final battle ends right before the Chunin exam and is a surprise that fans are sure to enjoy.

However enjoyable the story mode is, it is short, under thirty minutes short. Also the character selection is slim, mainly since this is the first game in the series. You’ll have access to Naruto, Sasuke, Sakura, Kakashi, Haku, Zabuza, Iruka and Lee. There are two other “hidden” characters to access beyond that, but these characters are actually just variation of other cast members. If you want to play as the other genin you’re going to have to wait until Clash of Ninja 2. On the other hand what’s in the selection is quite good. Sparing the extra characters each of the cast has a unique style fitting to the anime. Naruto is a straight forward fighter who can tumble in face first for a running attack, Haku throws senbon with great speed and Lee only has taijutsu attacks.

Anyone can sit down and instantly play Naruto: Clash of Ninja since the controls are so easy to learn. Pressing the b button does hand to hand fighting moves and the a button allows characters to use special ninjutsu techniques. For instance hitting a makes Sasuke can do his fireball jutsu while Sakura can throw a handful of shuriken. Combos are easily done by just pressing the b button or mixing it up by pressing a every once in awhile. Even reversals are simple to pull off. Each blow you land fills up the chakra gauge, after it gets up to around 75% you can pull off the substitution jutsu by pressing l or r. By doing this you’ll completely evade an enemy attack and appear behind them to start a combo of your own. Each character also has a counter move that you can do by pressing back and A. Naruto’s counter move is his trademark sexy jutsu where he transforms into a female. If his opponent hits him while he’s posing in his counter stance Naruto will appear behind the opponent and knock him or her down. The counter stance is a useful technique, but it’s much slower than using the substitution justsu. It can also be countered by a simple throw (Y button). Lastly each character has one ultimate technique they can use when the chakra bar is completely full. As you would imagine Kakashi’s lightning edge, Lee’s primary lotus and Zabuza’s silent killing technique are devastating attacks. A single special technique can take off a third of your life bar or more if you start off with a combo.

The gameplay in Clash of Ninja is fairly basic, but Eighting manages to make the game so stylish that fans of the series won’t even care too much. The models in Naruto: Clash of Ninja are shaped after the anime series and they look great. Ok maybe they’re not the best graphics on the Cube, but Eighting managed to capture the movements of the characters so well players will feel like they’re playing as their favorite character. Iruka fluidly teleports around the screen and Kakashi seamlessly chains combos. The series also takes advantage of the original North American voice actors to give life to the game. All of this stuff is exactly what fans want in a Naruto game.

+ Pros: Smooth visual style and the gameplay is easy enough for gamers of all skill levels to pick up.

– Cons: A shallow story mode and only a few selectable characters.

Overall: For the first console Naruto game, Naruto: Clash of Ninja is a fan pleaser. There’s just enough gameplay in it to keep gamers busy until Clash of Ninja 2.