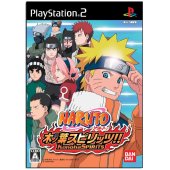 You begin the game with a tutorial about how to attack from Kankuro who tells Naruto how to jump, dash forward and do combos. If you played Naruto: Uzumaki Chronicles the controls are pretty much the same. Square is used for basic attacks and triangle is for heavy attacks. Naruto has a basic five hit combo that can be finished with a flip kick. The main difference in the fighting system is that you don’t have to charge the shadow clone jutsu or the rasengan. You just press R1 or R2 respectively to do an attack. Naruto also has a replacement jutsu that can be activated by pressing X when you’re attacked. If you time this right Naruto will turn into a log and appear behind his opponent to strike. One thing disappointing about Naruto’s character is that he has the same combos as he did in Uzumaki Ninden. When Naruto switches into Nine Tails mode he becomes the one tailed kyuubi and has a new set of attacks where he swings a giant claw around. Other than that not much has changed for him, but fortunately you don’t have to play as Naruto. In Konoha Spirits you’re assigned a squad of three characters, which you can freely switch between. Just tap L2 and you will switch to another character in your roster. Unlike Naruto: Uzumaki Chronicles, each allied character has their own health bar and chakra meter, so they are out for more than just a few seconds. Shikamaru can use has shadow binding jutsu to freeze up to five enemies and then throw explosive kunai at them. Sakura has Tsunade’s ground punch to hit a group of enemies and a health draining punch that makes a green orb appear which restores HP. Kankuro attacks with his puppets and can drop bombs on a group of enemies. Kakashi has the lowest combo count, but he has the lightning edge attack, the perfect move against bosses.

Whether you’re playing as Gaara or as the hidden character Sasuke, you’re going to do the same thing punch your way to the end of each chapter. Naruto: Konoha Spirits is broken down into chapters and each one starts back at the village. After Tsunade gives you a destination and a goal you walk on a map to your goal. On the way Naruto will run into ninjas and the screen will shift into a small arena for combat. Rogue ninja pop up to fight and they vary in what attacks they do. Most of them just stand there like idiots waiting to be hit, while “smarter” ninja hide in the back and throw kunai. When Naruto finally reaches his destination he enters a much larger map with a goal like save the village from burning or tracking down a ninja. If you’re ever lost you can call out Naruto’s shadow clones which run to the spot you are supposed to go to. A cool feature, but the maps are fairly straight forward with leaf village signs to point you in the right direction. The only time the shadow clone technique comes in handy is during puzzles like the clock level. When you’re faced with trying to find the right switch Naruto’s shadow clones can be used to immediately find the correct one. There are also some platform jumping elements in Naruto: Konoha Spirits. Jumping doesn’t work out well since you can’t get a good feel of how far Naruto is going to jump. Prepare to fall and start from the beginning a lot because you can’t get a clear view. The twitchy control set up isn’t precise and that is another obstacle to overcome. The wall jump is worse because you can’t see clearly where you’re going to land unless you pre-position the camera. These problems make the jumping portions needlessly frustrating. You’re not going to face any real challenges until you step into boss fights. Even those aren’t too difficult if you stock a healthy amount of health and chakra restoring items. As long as you lock on and throw all of your special attacks out you’re going to win.

The main story mode makes Naruto: Konoha Spirits a much larger game than Naruto: Uzumaki Ninden. Instead of doing missions there is some exploration and a few puzzles. Missions still exist, but they are more like side quests instead of the entire game. You can select missions from D rank all the way to S rank from a separate menu. Missions are pretty basic like defeat a number of enemies in a time limit. It’s basic, but beating missions earn you gold to buy recovery items and bonus experience orbs. Whenever you eliminate a ninja they explode into yellow experience orbs and blue orbs that restore chakra. You can use the experience orbs to boost stats like HP, taijutsu, ninjutsu and defense. Each character you get starts with a different set of stats and using experience orbs can buff them up. There is one problem with the system, orbs caught by a character can be used only be used on them. If you’re letting Neji capture all of the experience orbs only he will be able to level up, while the other characters remain weak. Instead of switching characters you’re going to find the game is much easier if you stick to the same party of three. That way you have three strong characters rather than a team of average ones.

The game is pretty basic, but it is a lot more entertaining since Naruto: Konoha Spirits supports two players. A second person can jump in at anytime for co-op play by pressing start. Having two people in one team makes Konoha Spirits way to easy, but it is a lot more fun to play with a friend than alone. Since the co-op system isn’t split screen you’re forced to wait for both players to move together. Once you master your skills by playing together you can challenge each other in Naruto: Konoha Spirits’ versus mode. Each player selects two ninja and then a stage to fight in. The versus mode isn’t as deep as a standard fighting game, but as a mini game it isn’t bad. There are no complex combos to learn, just the few moves your character has. In versus mode you can only play with characters you unlocked in the story mode, which means you start with Naruto and Kankuro. Thankfully unlocking characters is easy so your roster will fill up quickly.

Naruto: Konoha Spirits doesn’t offer anything spectacular and by the sixth chapter the repetition factor sets in. Compared to Uzumaki Ninden, Konoha Spirits offers a lot more. Two player support, larger levels and more playable characters makes this a game that Naruto fans will appreciate. The enhancements are going to please Naruto fans, but won’t really impress anyone else.

Unfortunately it doesn’t look like Naruto: Konoha Spirits is going to come out for all of the die hard fans in North America. The lifespan of the Playstation 2 is slipping and Naruto is allied with ninja from the sand since the game is set during the current filler arc. Here’s the good news, Naruto: Konoha Spirits is pretty import friendly. Game play is straight forward and even though the mission objectives are in Japanese they aren’t complicated. You also have the shadow clone Narutos to help you figure out where to go if you’re lost. Occasionally you have to read kana and simple kanji to solve puzzles, which can make some levels like the clock level frustrating. At this point you’re going to have to rely on a FAQ, but for the clock level I’ll give you a clue. First set the clock at 6 by punching it. A light attack makes the minute hand move 15 minutes and a heavy hit (triangle) makes the minute hand move 30 minutes. Set the clock to 6 and step back, a door will open. Go into that room and defeat all of the ninja. Read the tablet and go back to the clock and this time set it for 8. This opens a door inside the clock tower and you should be able to figure out what to do from there.