CyberConnect2 the makers of dot hack and the Naruto: Narultimate Hero series take Naruto and bring him to the PSP. In Mugenjo no Maki (Scrolls of the Eternal Castle) a mysterious castle is summoned in Konoha village. When Naruto, Shikamaru and Sakura enter the castle they find a mysterious masked girl, a bunch of scrolls and a lot less fighting than CyberConnect2’s other Naruto games. 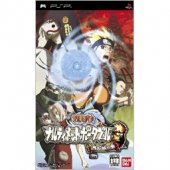 The main addition in Naruto: Narutimett Portable Mugenjo no Maki is the RPG mode, where you’ll guide Naruto and a squad of ninja through the eternal castle. On the right hand side of the screen is a map mostly with blank squares. Players can use six different scrolls, each representing a different game, to fill empty spaces and progress towards the next level. The green scroll is for the tree mini game where Naruto will start running up a tree similar to his “chakra training”. The tree has speed up icons to pick up, which make Naruto run faster and stumps to avoid. If you reach the top before time runs out you win the game. The blue scroll is for Shikamaru’s shadow mimic game. Shikamaru will show you a sequence of buttons to remember and then you have to press them in order to mimic Shikamaru’s actions. The purple scroll opens up a slot machine mini game where you have to win a set amount of money from the machine. If you already played Naruto: Narutimett Hero 2 or 3 for the PS2 these mini games might look familiar because they are exactly the same games just ported over to the PSP. Mugenjo no Maki does add in two new mini games. A trivia game with Iruka who asks players questions about the series is in the orange scroll and Ebisu’s shadow game in the grey scroll. In Ebisu’s game you need to look at Ebisu while he’s talking and then pick the stance he was in out of the three shadows. It’s simple game that takes a couple of seconds to play.

Since the game is based off the Naruto: Narutimett Hero series there is fighting too. If you use a red scroll or step over an event square you’ll begin a battle. However, you can only use active characters in your group, which consists of a squad leader and three genin. Once you select your character you will battle against the computer on a 2D battlefield that has hidden weapons scattered in the stage. You can hang out and throw kunai from a distance by pressing square or other items like the windmill shuriken if you happen to find one in a training dummy. Basic attacks and combos are done by pressing circle. Adding a directional button and circle switches the move up so there are a couple of different attacks. Each character also has throws to launch an enemy up in the air and two chakra attacks. If you press up up and circle with Kakashi you’ll do the Sennen Goroshi (a thousand years of pain) or if you are playing Hinata she will do a jukken combo. These special moves drain a little bit of your characters chakra bar. Instead of using basic chakra attacks you can use your entire chakra bar to do a super attack. To do this you have to press triangle to charge your chakra and then land a hit with circle. Just like the Narultimate Hero games, these are the stylish and flashy attacks fans love. However, there’s no button mashing or analog stick twirling like in the PS2 games. Naruto has his kyuubi rasengan, Lee does the ura renge and Shino launches two spears of bugs. Each of the ultimate moves have another bonus, temporarily powering up your character. Naruto gives off extra damage, Kakashi gets faster and Neji gains the ability to drain the enemy’s chakra for a couple of seconds after landing a super move. Just like the Narutimett Hero games Narutimett Portable has quick reversals with the replacement jutsu. By quickly tapping R you can dodge an attack and appear behind an enemy to start your own combo.

Winning fights or mini games earn you points that you can spend on the NaruP road to unlock extras. CyberConnect2 is known for packing on the extras. In Narutimett Portable there are character portraits to collect, songs from the sound track and something fans will love scenes from the anime series. These aren’t full blown TV clips. Although clever use of scaling and character voiceovers capture moments like what happens after the battle on Naruto Bridge pretty well. There’s 9,800 points to earn before you unlock everything. However, if players want to ignore earning virtual trinkets you can plow through the game by failing every scroll challenge. You’re still able to move forward, but you just don’t get a lot of points if you fail. Since there are 99 floors to complete the RPG mode can get a little tedious after floor fifty. If you want to progress through the castle even quicker you can take advantage of each characters ability to find secret passages. For instance Hinata can use her Byakugan to open up secret passages noted as dashed lines on the mini map and Chouji can use his meat tank technique to break rocks. After beating the main mode a new story unlocks with a couple more characters in the battle mode.

There’s nothing wrong with Naruto: Narutimett Portable, but on the other hand there isn’t anything new either. It’s the same stuff you’ve played on three PS2 games, just on your PSP. The character roster is the same, just shrunken down. Also how the character plays is fairly the same, except each character only has one charged chakra attack. Whether you’re going to enjoy this or not depends on how much you love the other games and if you’ve already played any of the Narultimate Hero games. If you’re new to the series and a fan of Naruto give Naruto: Narutimett Portable a look.

At times players will have to navigate through Japanese menus to pick out skills written in kanji. However, Iruka’s trivia questions are the biggest problem for importers. You’re only given a few seconds to read a question and pick out an answer. Otherwise the mini games are easy to play and the fighting mode is easy to pick up.

Since Naruto has been a smash hit in the USA Namco Bandai should pick this up. However, since the game is so far in the storyline it might be a year or so before that happens.

+ Pros: Naruto Narutimett Portable translates the gameplay and mini games from the PS2 series into a handheld game.

– Cons: Besides the dungeon crawling there isn’t anything new or innovative. Also the game would be better off if players could freely choose the mini games in the main menu.