After three 2D side scrolling beat ‘em up games Tomy takes a clue from Jump Superstars for Naruto: Saikyou Ninja Daikesshuu 4. Naruto 4 DS is a four player fighting game set in large arenas. The game begins at episode three where squad seven battles Kakashi for the right to become Genin all the way until the last major story arc in the anime. With over thirty playable characters this should be a hit right? 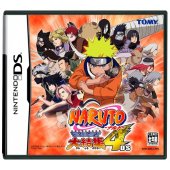 When players first take a stab at Naruto: Saikyou Ninja Daikesshuu 4 the options are limited. You can battle locally using the DS’ wireless adapter or start the mission mode. The game starts players off with easy “D-rank” missions. Instead of getting a chance to fight with rivals like Sasuke or Itachi you have to hunt wolves or capture flags scattered in a level. Only after all of the D rank missions are completed can players go on to more advanced tasks such as battling other genin. Later on missions have players protect other characters. Think back to when Shikamaru fights Tayuya. Players can re-enact this battle and save Shikamaru. At the end of the game gamers will get to face off in classic fights with Kabuto, the sound five and Orichimaru. Once the missions are over that is the end of the single player experience. There is no option for single players to set up their own fights. If you want to engage in a four way battle royale you have to get three other people with three Naruto 4 DS carts.

Instead of creating a new fighting system for Naruto: Saikyou Ninja Daikesshuu 4, Tomy reused the combat system from the side scrolling games. Each character has a launching attack (up+Y), a throw (X) and a three hit combo (press Y three times). All characters also have a super jump to move around the arena and the replacement jutsu to set up a fast counter attack. All over the stage are projectile weapons like kunai, shuriken and throwing needles to grab. The throwing needles are a fast ranged attack that hits enemies straight forward and in the sky, while the windmill shuriken can go through to hit multiple enemies. The only thing that makes Neji different from Rock Lee in Naruto DS 4 is their special chakra charged attacks. Each character has a maximum of four moves, but they do not have to be their own trademark techniques. You can give Tenten Neji’s kaiten skill or equip Sakura with Gaara’s desert funeral technique. The benefit of the interchangeable technique system is players get to create a custom arsenal of attacks. On the other Tomy removed any unique character traits since jutsus can be swiched around.

Battles in Naruto 4 DS usually come down to who can land a jutsu first. Once you select one of the four jutsus using the DS’ touch screen the window changes to ring of kanji. Players need to select the correct three characters to begin the chakra attack. After that you need to charge your chakra. Most attacks require players to draw a horizontal or vertical line. While other attacks like Sasuke’s phoenix fire jutsu has players blow into the microphone. A quick hit with Naruto’s rasengan causes a lot of damage. Or gamers can opt for another more efficient strategy, hiding in the corner and using a jutsu that hits everything on the screen. By using Shino’s bug skill or Tenten’s projectile weapons from a distance, players can easily beat all of the missions without getting a scratch on them. The only way to counter a ranged jutsu is to hit the other character in the few frames of animation while they are preparing the attack. Since there are only precious seconds to do this, long range jutsus end up being the most powerful attacks in Naruto 4 DS.

Naruto: Saikyou Ninja Daikesshuu 4 borrows graphics from the previous games. The result is that it doesn’t look much different from the Game Boy Advance titles. While the graphics don’t have to be stellar to make a great game, the Saikyou Ninja Daikesshuu series has been using the same sprites and level layouts from the first GBA title. Also we mentioned the game has around 30 characters, but there are plenty of duplicates. Cursed seal versions of the sound five, two Narutos and two Sasukes inflate the list. Naruto 4 DS is the only Naruto fighting game on the Nintendo DS, but even fans should hold out for something else.

Figuring out how to fight should be no problem after a couple of minutes, but importers could run into trouble when trying to decipher mission goals.

Naruto: Saikyou Ninja Daikesshuu 4 is further along in the story compared to the Cartoon Network broadcast. If it does come over it won’t be for a couple of years.

+ Pros: Four player wireless battles and a large selection of characters to play with.

– Cons: The mission mode takes about five hours to beat and since there is no quick battle mode Naruto: Saikyou Ninja Daikesshuu 4 gets old fast.

Overall: A short mission mode, basic fighting engine and the absence of a single player battle mode limits the time players will spend with Naruto 4 DS.