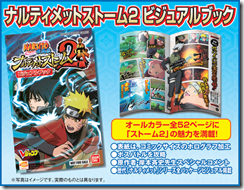 Namco Bandai set July 29 as the date for the Naruto Shippuden: Ultimate Ninja Storm 2 demo. Producer Sasaki says PlayStation 3 and Xbox 360 owners will be able to get the demo and try a Kakashi boss battle then. The demo sounds like the same fight Namco Bandai let E3 attendees play last month.

Naruto Shippuden: Ultimate Ninja Storm 2 is set to come out on October 21 in Japan. Reserve the game in the Land of the Rising Sun and you’ll get a visual book as a bonus.

While a release date for North America and Europe has not been announced, Sasaki says Naruto Shippuden: Ultimate Ninja Storm 2 will ship roughly the same time in mid-October.