Last year Namco Bandai released Naruto: Uzumaki Ninden, the first 3D action game based in the Naruto universe. Since the game followed the Japanese series, Naruto: Uzumaki Ninden was far along the Naruto storyline. Since the game contained plenty of spoilers it was a surprise that Namco Bandai Games decided to bring this title to North America. Were they going to change the game to fit it in place of the North American broadcast? The answer is they did, but story changes aside it is still plays like the Japanese counterpart. 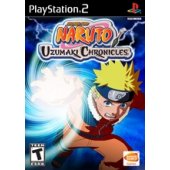 Let’s face it whether you’re playing the Japanese release or the North American one the story in Naruto: Uzumaki Chronicles is flimsy. It is a stitched together to give Naruto some reason for going off and doing advanced missions. In the Hidden Leaf Village there are “troubling incidents” that force the genin to take on advanced missions. Perhaps the leaf village has a different standard of what is considered “advanced” because most of the game you’re protecting some kind of cart. Whether you’re assigned to escort a prisoner or defending goods Naruto’s basic missions involve him walking to and from the leaf village while fighting random ninjas who attack the cart. Instead of walking through 3D lands, you point to where you want to travel on a map and Naruto walks there. If you randomly encounter an enemy the screen transforms into a 3D battlefield.

While in combat Naruto can execute combos by tapping the weak attack button and deal extra damage with the heavy attack button. His best combo ends with a flip kick called the “heavenstrike” attack. Naruto’s heavy attack also serves a second purpose, crowd control. His first heavy attack does a spinning back fist which can hit a group of enemies at once. Naruto also has a trademark “jutsus” like the shadow clone jutsu where Naruto releases a group of clones to do a five hit combo. Naruto also has his sexy jutsu which can be used to stun a group of enemies, but female ninja are immune to this attack. Since the game was released in Japan first Naruto has his Rasengan attack under the name power strike. It’s the same straight forward blast of energy and clearly Naruto’s most powerful attack. Later on the game and during boss fights locking on and using the power strike is the key to victory. The other main strategy is to get Naruto to his Nine Tails state as quickly as possible. In his Nine Tails form Naruto automatically summons shadow clones to attack and he gives extra damage. You can only activate this power when Naruto is low on health so it is a double edged sword if it is worth it to leave Naruto with a low life to activate this power.

As you progress through the game and pound other ninja into the ground they drop yellow “virtue” orbs to collect. Virtue is also earned by completing missions and these points can be spent to upgrade Naruto’s stats. You can directly increase his life or his chakra stamina or you can spend the virtue on skill chips. In Naruto: Uzumaki Chronicles you’re given a skill plate to fill with geometric status boosting pieces. Red chips increase Naruto’s physical abilities like life or stamina and blue chips increase his ninjutsu skills. You’re limited by the size of the plate and the shape of the pieces, which makes the skill plate system a geometric puzzle. Later on you can earn special pieces to boost Naruto’s power strike, increase the number of shadow clones he can summon and do the Naruto Uzumaki barrage.

When you accept missions from the Hokage you’re given a chance to pick members to assist Naruto. Neji, Sasuke, Choji and Shikamaru are available to join your team. By pressing L2 you can select one of your partner characters to temporarily replace you. Shikamaru is probably the most useful partner since he can bind up to five enemies with his shadow possession technique. This is useful for keeping the cart from being damaged and in missions where you have to defend a store house from ninjas. Neji is probably the second most useful character since his palm rotation can take out a group of enemies at once. After a short amount of time or after a couple of chakra attacks Naruto jumps back into action. Your partner character hangs in the background restoring chakra and once 75% of their chakra is restored you can summon them again. In some missions you’re automatically partnered with a character like Kakashi who cannot be selected normally. Now if you were expecting to play as Hinata, Ino, Kiba, Sakura or Lee you’re going to have to do it in another game.

As you can see the gameplay is pretty much the same as Naruto: Uzumaki Ninden, but since the timeline is different the game was adjusted accordingly. Tsunade is completely out of the picture and so are all of the scenes with her discussing the missions to Naruto. She is replaced with a menu and an empty Hokage desk. Boss battles are altered too, instead of battling Kisame you’re going to fight Kabuto. Another minor change is where you fight Gaara the separate mission where you track him down is gone and instead you face him later in the game. Gaara also has his Chuunin exam costume instead of his second outfit. There are a couple of other altered missions like where you track down Jiraya’s manuscript has been removed too. Later story missions where Naruto visits the sand village and investigates Orichimaru’s biological experiments are still present and the changes are rather minor. Now before you hang Namco Bandai out to dry for cutting things out of the game think of the other option, never getting to play it at all. Since the lifespan of the Playstation 2 is dwindling there is a good chance the game would never come over if it had to wait for the anime to catch up. Also some of the changes led to new fights so it isn’t all that bad.

While the changes are going to irk some diehard Naruto fans, only Naruto fans are going to want to play Uzumaki Chronicles. The game gets repetitive quick since many of the missions require doing the same thing over and over. Later on the game does get a little more interesting when you’re hunting down Orichimaru and actually running through 3D areas instead of dueling in small battlefields. Still the game’s main draw is getting to play with the Naruto characters and not for the game’s innovation or intense action. If you’re a huge Naruto fan you might want to check this out otherwise stick to the quality Naruto fighting games.