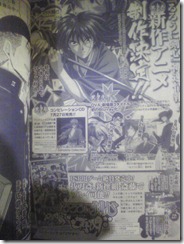 The Rurouni Kenshin 15th anniversary project continues! This announcement is likely to get far more people excited than Rurouni Kenshin: Saisen on PSP, which is why we’re making a rare exception and reporting anime news on a weekday.

Japanese magazine, Jump Square, has confirmed that a new Rurouni Kenshin anime project is in production. No further details have been revealed yet. Additionally, Blu-ray versions of the Rurouni Kenshin OVAs and the Ishin Shishi no Chinkonka animated movie will also be released in the near future.

Note: the original version of this post used the word “series” to describe the anime project. The project isn’t confirmed to be a full-length series yet, so we’ve rectified our wording.